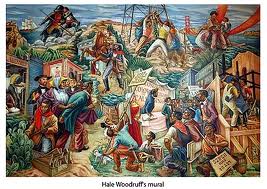 A rare opportunity to view the historic murals that grace the lobby of the Golden State Mutual Life Insurance building, located in the heart of Historic West Adams, will occur Saturday, October 22, when West Adams Heritage Association (WAHA) presents a tour from 12:00 noon to 3:00 p.m., hosted in collaboration with CAAM–the California African American Museum, Los Angeles Conservancy and The Mural Conservancy LA.

The murals, which depict early African American contributions to the building of California, are an integral element of the new exhibit that just opened at CAAM, “Places of Validation, Art & Progression.” This exhibit, which runs through April 1, 2012, is CAAM’s contribution to the city-wide series of exhibitions being produced under the umbrella PACIFIC STANDARD TIME: Art in L.A. 1945-1980.

The murals are currently endangered, threatened with removal. This might be the public’s last chance to view them. The open house is spearheaded by WAHA’s long-running efforts of preservation advocacy to save the murals.

The relevance to the art world of the Golden State Mutual Life Insurance Company is the ground-breaking support this enterprise provided to emerging African American artists. The lobby and office walls were showcases to a wide array of notable artists, including William Pajaud, Charles White, Betye Saar and John Riddle.

Tourgoers will also receive a copy of WAHA’s most recent publication, “West Adams’ Landmarks of African American History,” a unique compendium of photos and brief biographies of more than 70 prominent African Americans who lived in the West Adams area of Los Angeles and includes information about their homes in West Adams. Advance tickets are $15.00 and are available at www.WestAdamsHeritage.org for the afternoon open house, or call CAAM (213) 744-7536 or -7432 regarding the morning bus tour which includes visiting the murals and St. Elmo Village.

West Adams Heritage Association is a nonprofit organization founded in 1983 to support preservation of the community’s architectural and cultural heritage. WAHA has grown from a small resident support group to a recognized preservation voice with hundreds of members who live in the many neighborhoods of the Historic West Adams District.