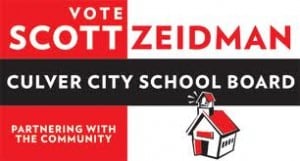 Desmond Burns and his lovely wife Lisa Lewis Burns are hosting a “meet and greet” with Culver City School Board President and candidate for re-election Scott Zeidman at their home (3938 Bentley Avenue, Culver City, CA 90232) on Sunday, October 2, 2011 from 3:00 to 5:00 pm, with light snacks, coffee and lemonade on tap.

Scott has been endorsed by over 500 residents, as well as all five members of the Culver City City Council, all five members of the Board of Education, State Senator Curren Price, State Assemblyperson Holly Mitchell, six former Board of Education Presidents and eight former Culver City Mayors. Come on out to the Burns home to speak with Scott about the changes in Culver City Schools over the past four years, as well as his thoughts for the future of Culver City Unified School District.