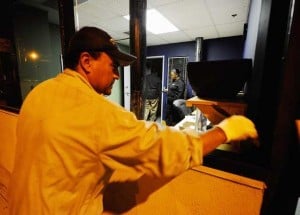 The Los Angeles Obama for America office at Centinela and Jefferson was vandalized yesterday, Sept. 22 sometime in the early evening.  The incident was reported to police at 7:25 p.m..

According to the Los Angeles Times, staff members were in President Obama’s Westside campaign office when several large plate glass windows and a glass side door were smashed, sources said Friday.

Initially, officials thought BBs or pellets were used in the vandalism in the incident Thursday that took place at 7:25 p.m. in the 6700 block of South Centinela Avenue, but sources said no evidence of those items was found.

Authorities are also looking at whether the vandals used a crow bar, tire iron or other large instrument to smash the windows.

Though the campaign workers heard breaking glass, they did not see anything, sources said. A Los Angeles Police Department spokeswoman initially said no one was in the office at the time.

As part of its investigation, the LAPD will be seeking potential videotape evidence, as well as witnesses who may have encountered vandals before or afterward.

FBI officials have offered assistance to determine whether the vandalism was a hate crime, an act of domestic terrorism or other incident that would prompt increased involvement from federal departments.

The U.S. Secret Service is also assisting in the investigation.

Obama is scheduled to visit Los Angeles on Monday to raise money for what is expected to be a bruising 2012 reelection campaign.

This office is the main OFA office in California and has the office of the state OFA director.