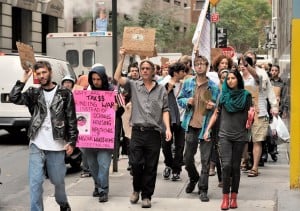 As I was waving a stick with a long orange ribbon on it, singing with some freshly acquired friends, it came to me that this was my second parade in two days. When we decide to take it to the streets, actions become real and public in a whole new way. Walk it like you talk it, and we change the world.

Saturday’s parade was our local slice of Moving Planet Day. Transition Culver City and a group of like-minded organizations had put together an “Alternative Transportation Parade” and I came with my own gang of girl bikers to get in on the action.

It was a blast; we decorated our bikes at the Lion Fountain, and took the bike route through the downtown neighborhood, teaching the kids about sharing the road with cars, and using hand signals. Getting my girls to become daily bike riders has been part of my goal for the last month. Having a big crowd of friends to do it with makes it so much easier. One of those funny things about human nature – when we’re in it together, we are really in it.

Getting my older daughter to ride her bike to school has been a challenge. She does not like to do things alone. Worse, many adult friends have expressed their concern for a kid riding the bike path, saying that there are dangers lurking, tough kids, and malicious adults. (I’m a bad mom because I’m not driving to school ?) The idea that we are not safe on the street is one of the pervasive fears that keep us inside- inside our cars, inside our buildings, inside our prejudices. As often as Culver City and Mayberry are mentioned in the same breath, I realize there risks out there. Still, we rarely see anyone else at all on the path, let alone anyone threatening. I’m not asking her to be Ruby Bridges. But until we have some other middle-schoolers riding in on a regular basis, she gets a full family escort of her mom and her sister riding with her. In the early light of morning, we are our own parade.

As I was walking around the corner of 8th and Westmoreland downtown this past Sunday afternoon, singing loudly about love and hope, I was part of a shorter parade walking the block around the First Unitarian Church in Los Angeles. We were celebrating the ordination of my friend Tera Little. Since Tera’s focus in her ministry is about taking action for justice, she opted to have her supporters take the street as the first part of her ceremony. It felt good. The rest of the ritual, the words and the music, was the official sanctioning of another leader for liberal religion. But getting us to move ourselves over the graffiti stained sidewalks of Los Angeles was the thing that made us all feel like participants and not spectators.

There’s another parade going on that is not as loud as it needs to be just yet. The picture in the upper left is one of protestors marching on Wall Street. The protests have gone on, growing daily, for more than a week, and yet big media has turned a blind eye. One participant, identified as Reverend Billy (I was not at his ordination, so I don’t know what church he’s representing) posted this on Occupy Wall St. org;  “In the morning, we talked about the occupations rising up in cities around the United States, joining us in what we’re doing, as people begin rediscovering the power in themselves against the powers looming over them in buildings. We talked of calling more people to do what we’re doing.

“We strolled around the plaza. We wrote songs with new friends. We argued about politics with each other, but not a politics of puppets: a politics for us. Before the police lined along the Broadway side of the plaza, we cried together, “We are daring to imagine a new socio-political and economic alternative that offers greater possibility of equality.”
“Safety in numbers!” a sign says. “Join us.”

That last 48 hours certainly put me in a place to consider what walking my talk feels like. The politics of playing in the plaza, the faith of cheering for another leader stepping forward, the social network news that supercedes the broadcast channels, all these things connect into a line that moves us all forward.

It seems to be parade season. The idea of having an American Autumn to follow the Arab Spring is not just in your hands, it’s in your feet. Get out in the street.