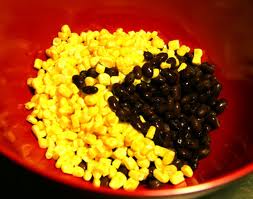 One of my favorite potluck recipes is a corn and black bean salad. Vegan friendly, it’s also quite versatile. You can spice it up with chopped Anaheim or Jalapeno chilis. Personally, I love adding tomatoes and/or red bell peppers to the basic mix. They are a win/win ingredient: adding beautiful color and great vitamins and nutrients to this healthy salad. Give it a Mexican or Central American flavor with chopped onion, lime juice, cilantro, and a dusting of chile powder. I’m a big fan of cilantro, but a couple of my friends abhor it. When they come over, I omit the cilantro from the main salad and serve a bowl of chopped cilantro on the side, so both cilantro-lovers and cilantro-haters are happy.
Last Tuesday, I picked up fresh corn at the downtown Culver City Farmers Market, fully intending to make this vegan-friendly main dish salad. But when I got home, I decided to break out of my black-bean and corn rut. One of my vegetarian friends is exceptionally fond of succotash, a dish I have always associated with the starchy, bland frozen vegetable mix of my childhood. I decided to see what it would taste like with farm-fresh ingredients.
The word “succotash” is derived from the Narrangasett (Algonquin) word “msíckquatash.” The combination of boiled corn kernels and lima beans was one of the mainstays of Native American diet. Over time, it has become strongly associated with Southern cooking. On the Pacific Rim, however, the popularity of edamame (boiled soybeans) has given rise to a fusion-inspired variation.
Fresh baby lima beans have a smoothness and tenderness which is light years away from the more commonly available canned limas. If you’re lucky enough to find some fresh shell beans, you won’t regret the time you spend in shelling them once you taste the finished dish. Frozen baby limas and edamame can be substituted with little loss in flavor. Suncoast Farms at the Tuesday market sells dried lima beans, along with other legumes and pulses, all year long. If you soak the dried beans overnight, you’ll be good to go the next day. Between these three options, you have are plenty of alternatives to the often far-too salty and mushy can of limas beans.
There is no “right” or “wrong” way to make succotash. I’ve included one basic southern-style recipe and another one with a decidedly southwestern kick. Both of the following recipes are vegan. But die-hard carnivores need not despair. The first recipe was adopted from one including bacon. With bacon all the rage these days, you won’t go wrong if you add some bacon when serving Southern Succotash to omnivores.

Add 1 T oil to large saute pan. Place over high heat. Add corn kernels, chopped peppers, and onion. Saute until the vegetables start to brown and caramelize, about 5 to 7 minutes. Add remaining oil, chopped squash and spices. Turn heat down to medium, and continue cooking for another 3 minutes. Remove from heat. Garnish with cilantro, if desired. You can spice this dish up or cool it down by your choice of chile pepper. Make sure to exercise caution when removing seeds and membranes, and dicing hot chile peppers. Some people use plastic gloves; everyone should wash their hands thoroughly after the peppers are minced.

The downtown Culver City Farmers Market is held on Tuesdays from 2 to 7 pm on Main Street between Venice and Culver Blvds. The Saturday market takes place from 7:30 a.m. to 1 pm in the northeast corner of the Westfield Culver City parking lot between Slauson and Hannum.

Katie Malich has never used the phrase “suffering succotash,” despite many hours of watching Sylvester the Cat on Looney Tunes cartoons. No succotash should be made to suffer, even the uninspired and starchy frozen medley once served by well-meaning parents and cafeteria cooks.