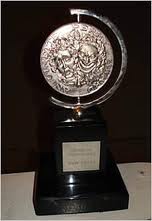 The National Youth Arts organization has announced it has given top honors to the Culver City Middle School performance of “Darn Yankees,” including several honors given to individual actors.

Each year, the organization receives more than 200 submissions of musicals, dramas and films from schools and private programs around the country. At the end of the school year, the group votes and selects “Outstanding” performers, productions, designers, directors, etc. – sort of a Tony Awards for youth theatre. The organization recognizes honorees in two divisions – Junior Division is grades K-8 and Senior Division is grade 9-12.

“Darn Yankees” earned three awards and received four additional nominations, pretty impressive for a production in which 50% of the case was making his/her stage debut!

The awards were presented to the honorees in a ceremony on Sunday, June 19 at Loats Theatre on the campus of Newport Harbor High School in Newport Beach.

In the first known large-scale research project that solicits students’ perceptions about strategy effectiveness to reduce peer mistreatment in our schools, Culver City Middle School has been ranked as one of the nation’s top three …[READ MORE]

CCMS Students Get Medals from MESA

How many more reasons do we have to be proud of our kids? On March 12, a number of CCMS students competed with students from throughout Los Angeles on the USC campus for MESA (Mathematics …[READ MORE]