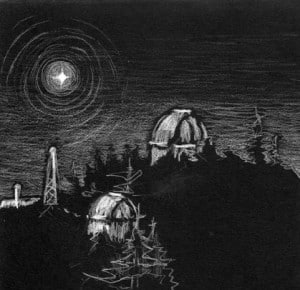 New Mars Rover to Have 3-D Color Vision;
“Highway to the Stars” Opens to Mt. Wilson

Two digital color cameras riding high on the mast of NASA’s next Mars rover will complement each other in showing the surface of Mars in exquisite detail.

They are the left and right eyes of the Mast Camera, or Mastcam, instrument on the Curiosity rover of NASA’s Mars Science Laboratory mission, to be launched in late 2011. Landing on Mars is scheduled for August 2012.

The right-eye Mastcam looks through a telephoto lens, revealing details near or far with about three-fold better resolution than any previous landscape-viewing camera on the surface of Mars. The left-eye Mastcam provides broader context through a medium-angle lens. Each can acquire thousands of full-color images and store them in an eight-gigabyte flash memory. Combining information from the two eyes can yield 3-D views of the telephoto part of the scene.

The telephoto Mastcam, called “Mastcam 100” for its 100-millimeter focal-length lens, provides enough resolution to distinguish a basketball from a football at a distance of seven football fields, or to read “ONE CENT” on a penny on the ground beside the rover. Its images cover an area about six degrees wide by five degrees tall.

Researchers will use the Mastcams and nine other science instruments on Curiosity to study past and present environments in a carefully chosen area of Mars. They will assess whether conditions have been favorable for life and favorable for preserving evidence about whether life has existed there. Images and videos of the sky will document contemporary processes, such as movement of clouds and dust.

YOU AND I MAY NOT BE HEADING OUT TO MARS ANYTIME SOON, but as an out-of-this-world destination for a close-at-hand Saturday or Sunday outing, Mount Wilson Observatory can hardly be surpassed. And your trip has been made easy again, thanks to the reopening on June 3 of the Angeles Crest Highway from La Canada–Flintridge. A 7-mile stretch starting at the Angeles National Forest entrance above La Cañada–Flintridge had been closed following the devastating Station Fire of 2009. A plan to reopen it in January was reversed after 12 inches of December rainfall washed out several sections of the highway. A Caltrans army of engineers, geologists, maintenance crews, and environmental planners reconstructed entire hillsides, removed debris, repaved large portions of the roadway, and striped the lanes.

Although the Mount Wilson Observatory is open to the public from 10:00 a.m. to 4:00 p.m. every day of the week, if you come on a weekend you can enjoy food service and a guided walking tour of the Observatory area. The tour begins at 1:00 p.m. at the “Cosmic Café” (the building overlooking the parking lot) and takes about 1 to 2 hours. Your docent will tell you all about the Observatory’s rich history and ongoing science programs while you walk among the domes of this birthplace of modern astronomy.

And there’s no need to even pack a lunch for this trip—fine sandwiches are served at the Cosmic Café. You’ll also find Mt. Wilson souvenirs there, including T-shirts, hats, bumper stickers, and postcards.

You can reach the Observatory in less than an hour from Pasadena. From La Cañada–Flintridge, follow the Angeles Crest highway (State Highway 2) to the Red Box–Mt. Wilson Road; turn right, go 5 miles to the Observatory gate marked “Skyline Park,” and park in the large parking lot inside the gate. The U.S. Forest Service requires those parking within the Angeles National Forest to display a Forest Adventure Pass. It can be purchased for $5 (one day) or $30 (season) at the Cosmic Café.

You can contact Bob Eklund at [email protected], or visit his websites at www.bobeklund.com and firststarbook.com.

Venus and Mercury Pair Up in Twilight For the next week, the two closest planets to the Sun will shine together low in the twilight after sundown. Anyone can see them; they’ll form an eye-catching …[READ MORE]

Discovery of First Truly Habitable Exoplanet Suggests Our Galaxy Could Be Teeming with Life- A team of planet hunters led by astronomers at UC Santa Cruz and the Carnegie Institution of Washington, and supported by …[READ MORE]