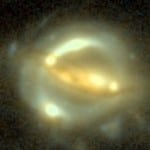 Astronomically Large Lenses Measure
Age and Size of the Universe

Using entire galaxies as lenses to look at other galaxies, researchers have a newly precise way to measure the size and age of the Universe and determine how rapidly it is expanding. The measurement confirms that the Universe is 13.75 billion years old. It also confirms the strength of “dark energy,” which is responsible for accelerating the expansion of the universe.

These findings, to be published in The Astrophysical Journal this month, are the work of an international team of researchers using data collected by the Hubble Space Telescope.

The team used the technique of gravitational lensing to measure the distances light traveled from a bright, active galaxy to the Earth along different paths. By understanding the time it took to travel along each path and the effective speeds involved, researchers can infer not just how far away the galaxy lies but also the overall scale of the universe and some details of its expansion.

A gravitational lens is formed when the light from a very distant, bright source is “bent” around a massive object (such as a cluster of galaxies) situated between the source object and the observer. The process, known as gravitational lensing, is one of the predictions of Albert Einstein’s general theory of relativity.

Although Orest Chwolson is credited as being the first to discuss the effect in print (in 1924), the effect is more usually associated with Einstein, who published a more famous article on the subject in 1936. Swiss astronomer Fritz Zwicky suggested in 1937 that the effect predicted by Einstein could allow galaxy clusters to act as gravitational lenses. It was not until 1979 that this effect was confirmed by actual observation.

Often, it is difficult for scientists to distinguish between a very bright light source far away and a dimmer one lying much closer. A gravitational lens circumvents this problem by providing multiple clues as to the distance light travels. That extra information allows them to determine the size of the universe, often expressed by astrophysicists in terms of a quantity called the Hubble constant (named for the pioneering astronomer Edwin Hubble, who accurately measured the speed of the Universe’s expansion while observing with the Mount Wilson Observatory’s 100-inch telescope).

“We’ve known for a long time that lensing is capable of making a physical measurement of Hubble’s constant,” said team member Phil Marshall of Stanford University. However, gravitational lensing had never before been used in such a precise way. It provides a new way to measure the Hubble constant that is just as precise as long-established methods such as observation of supernovae and the cosmic microwave background. “Gravitational lensing has come of age as a competitive tool in the astrophysicist’s toolkit,” Marshall said.

Though researchers do not know when light left its source, they can still compare arrival times. Marshall likens this to four cars taking four different routes to get to the same destination on the opposite side of a large city. Like automobiles facing traffic snarls, light can encounter delays, too. “The traffic density in a big city is like the mass density in a lens galaxy,” Marshall said. “If you take a longer route, it need not lead to a longer delay time. Sometimes the shorter distance is actually slower.”

The gravitational lens equations account for all the variables such as distance and density, and provide a better idea of when light left the background galaxy and how far it traveled.

Spacecraft Camera Yields Most Accurate Mars Map Ever; Perseid Meteors Return August 12 A camera aboard NASA’s Mars Odyssey spacecraft has helped develop the most accurate global Martian map ever. Researchers and the public can …[READ MORE]

Cassini Spacecraft Captures Ocean-Like Spray from Saturn’s Moon– NASA’s Cassini spacecraft has discovered the best evidence yet for a large-scale saltwater reservoir beneath the icy crust of Saturn’s moon Enceladus. The data came from the …[READ MORE]