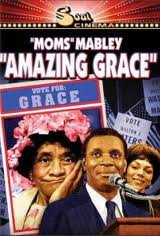 The film series on ‘Black Talkies’ will continue at the Mayme Clayton Museum and Library on May 28 with “Amazing Grace” starring Moms Mabley. The feature film will be preceded by a Moms Mabley short film at 3:30pm with the feature film at 4 pm.

Jackie “Moms” Mabley’s career began as a comedian on the “Chitlin Circuit” which included black venues such as Harlem’s Apollo Theater. Through the course of her fifty year career, Moms became a success on stage, radio, television and feature films. “Amazing Grace” has a hysterical supporting cast, legendary’s such as: Stepin Feichit, Butterfly McQueen, Moses Gunn, Slappy White and Rosalind Cash. In “Amazing Grace,” Moms Mabley brilliantly portrays “Grace” in the leading role. Mabley carries the film, leaving laughter in her wake.” The story begins with a corrupt Bostonian politician paid to ruin the Baltimore mayoral election. Fiesty Moms Mabley and costar Slappy White keep the audience in stitches during this laugh-a-minute escapade. Mabley’s “Grace” defies convention and traditional politics with comedy and the strength of her convictions. Grace unsnarls the mayoral campaign and simultaneously straightens out her community. Directed by: Stan Lathan.