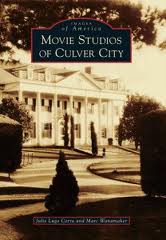 The program will feature many of the book’s hundreds of photos and descriptions of the motion picture and television studios that made Culver City “The Heart of Screenland” and will offer a vintage tour through the legendary movie lots of Thomas Ince, Hal Roach, Goldwyn, Lorimar, MGM-UA, Columbia, Sony Pictures, DeMille, RKO-Pathe, Selznick, Desilu, Culver City Studios, Laird International, The Culver Studio and mini-factories as the Willat Studios.

Published by Arcadia Publishing, the book is part of the Images of America Series, and will be available for purchase and signing by the authors after the meeting. It will be sold at local Barnes and Nobel stores, Costco, Larry Edmunds Bookshop (in Hollywood) Vromans (Pasadena) Walgreens in Marina Del Rey, and at www.ArcadiaPublishing.com and www.Amazon.com.

Cerra, a sixth generation Californian, was born and raised in Culver City, and is the author of more than 300 magazine and newspaper articles about Culver City as well as four books on local history including Culver City, the Heart of Screenland and Images of America, Culver City CA.

Wanamaker was born in Los Angeles and grew up Hollywood. In 1971 he formed Bison Archives, a research and information archive on the history of the motion picture industry, which supplied the images for the book. Bison Productions, his adjunct
production company, has assisted in the production of more than 100 documentaries and feature films.

The CCHS Archives & Resource Center (ARC) will be open following the meeting. Entrance to the meeting is through the back parking lot of the Veterans Memorial Building.

For more information, please call the Society at (310) 253-6941 or inquire by e-mail at [email protected] Also, visit the CCHS website at: www.culvercityhistoricalsociety.org or search Facebook at CulverCity HistoricalSociety for updates.

All New Picnic for The Culver City Historical Society

This year’s annual Culver City Historical Society Picnic and meeting on Wednesday, July 21, will have an all new flavor, and what a flavor it will be! A savory catered dinner will be cooked in …[READ MORE]

There will be an official marking of Dr. Paul Carlson Memorial Park as Historic Site #12 on Saturday, May 22 at noon. Join the festivities at the park – Braddock Drive at Le Bourget Avenue. …[READ MORE]

A community walk event, in partnership with the Bicycle and Pedestrian Committee and the Culver City Historical Society. Come and join your neighbors and friends for a guided walk thorough historical sites, and step into …[READ MORE]