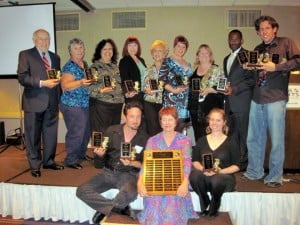 Kentwood Players, founded by the late Arky and Jan Marcom, Elizabeth Thornberg and Betty Francis, in December 1949, performs out of the Westchester Playhouse, located near LAX. The company actually got its start, and its name, as members of the Kentwood Elementary School PTA in Westchester, motivated by a school play they performed there, decided to keep a good thing going. This small group of talented men and women quickly got their act together, so to speak, and in 1950, this illustrious theatre “family” officially began. And after 60 years, the community theater group is still going strong!

The Kentwood Players Marcom Masque Awards, the annual awards voted upon by group members, were announced at an Awards Ceremony on June 19, 2010 at the Four Points by Sheraton Hotel in Culver City, CA. After a wonderful three-course dinner, the group’s 60th year of theater excellence was captured in song by Catherine Rahm and her excellent cast of entertainers during the Awards Ceremony.

The recipients of the 2010 Marcom Masque Awards:

In addition to the above, there were 76 names on the list of people who contributed to the shows in many technical aspects over the course of the 2009-2010 season. Gail Bernardi graciously named each! Technical award certificates will be available for the winners to pick up at the Kentwood Players July 21 meeting.

Our meetings are free to the public and are held on the third Wednesday of every month at 8:00 PM at the Westchester Playhouse, located two blocks west of the San Diego Freeway and two blocks north of Manchester at 8301 Hindry Avenue in Westchester, CA 90045. You’ll have the opportunity to meet and get involved with our very professional and talented group of producers, directors, actors and designers as we celebrate 60 years of presenting great entertainment.

For those who just want to get away from it all, Kentwood Players offers one of William Shakespeare’s most delightful comedies “As You Like It” from July 9 to August 14, on Fridays and Saturdays …[READ MORE]

Alice In Wonderland from Kentwood Kids

Kentwood Players presents a Kentwood Kids production of Lewis Carroll’s classic and loved story “Alice in Wonderland” on Saturdays, November 20 & 27 and December 4 & 11 at 11:00AM and 2:00PM at the Westchester …[READ MORE]