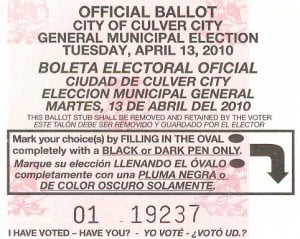 Even after adding more than 400 more votes in to the totals, Jeff Cooper was still the winner of the City Council election, with a complete vote total of 2486.
“Thanks to the county for moving so quickly through the signature verification process so that we could get this finished today,” said Martin Cole, the assistant city manager in charge of conducting the election, “no one wanted to hold this out until Monday.”

As the party that had dissembled on Tuesday evening began to re-assemble on Friday afternoon, the slow work of counting, opening and sorting the ballots began. Of the 4622 ballots cast, the 446 that were still to be counted after Tuesday’s results were savored slowly.

According to Martin Cole “This may be a record number of vote-by-mail ballots cast. While I will have to check my statistics, it seems to be significantly higher than 2004 or 2002.” With 24,121 people registered to vote- 7948 votes were tallied on April 13.

It was a long few days for the candidates waiting to be confirmed. As the precincts were added in one by one, the separate counts whispered through the chambers, the final tallies did not change anyone’s status, and Monday will see Jeff Cooper sworn in as the new council member.

There is an election coming up on March 8  and you can get the information that you need at the Los Angeles Community College District Candidates Forum, to be  held at the Veteran’s Auditorium (in …[READ MORE]

Jeff Cooper announced the additional endorsements of many current and former Culver City School Board members for his City Council campaign. Among the endorsements and supporters he has added to his growing list are four …[READ MORE]

How to Vote- Part 3 by Steve Gourley

Editor’s Note- In this final section of Steve Gourley essay, the rewards for your participation are outlined. Guess what? If you follow my advice, your rise to power in Culver City cost you almost nothing: …[READ MORE]