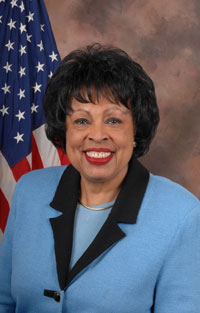 Rep. Diane Watson (D-Los Angeles), a noted local politician for more than thirty years, will announce her retirement from Congress this Thursday. Watson, 76, will hold a news conference tomorrow to announce her plans.

A Democrat is expected to win the district, which stretches from Culver City to midtown Los Angeles and north to Hollywood. Watson’s retirement would create an open California House seat in this year’s midterm elections.
In 2001, Watson became the representative for Culver City by winning a special election to fill the vacancy created by the death of Julian Dixon.

Mayor Andy Weissman commented “Rep. Watson has always been a champion for Culver City in the halls of Congress and we will miss her as our representative.  We are grateful for her service and wish her all the best in her retirement.”

Watson became the first African American woman elected to the Los Angeles school board in 1975. In 1978, she was elected to the state Senate, serving until she was forced to give up her seat in 1998 because of term limits. In 1992, she ran unsuccessfully for county supervisor. In addition to her local political offices, in 1999, President Clinton appointed her ambassador to Micronesia.

Culver City School Board member Patricia Siever was saddened to hear of Watson leaving her post, and noted “Those are going to be some very big shoes to fill. Watson did a lot for Culver City, and she was here often. I knew her for a number of years, and I think that many of us are going to miss her.”

Siever continued. “I wish all the best in her retirement, she gave many years of her life to public service.”

Former Mayor Alan Corlin, who worked with Watson during his term of office, said “Having worked with Diane Watson for number of years, I wish her well in her retirement, and I thank her for all the help she gave to Culver City.”