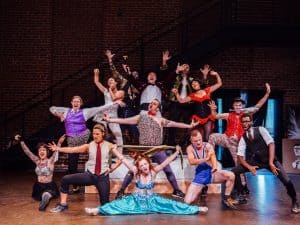 The powerful, thought provoking theater offered by the Actors’ Gang opens a new season with ‘Captain Greedy’s Carnival,” subtitled – A Musical Nightmare. Almost an opera, there is barely a moment that is spoken rather than sung, with 24 songs listed in the program and several more on offer in the lobby during intermission. While capitalism is killing us all, we can at the least go down singing.

The book and lyrics are both by Jack Pinter, and music by Roger Eno, and the message, while being utterly on target, is also provided with such firepower that the audience might feel under attack. But holding the fort is essential. There isn’t an aspect of this show that hasn’t been carefully crafted by Will McFadden, who both directs and carries the lead as Captain Greedy. McFadden’s passion for political theater could light up the entire West Coast (if we could only find the proper style of transformer) and his relentless energy makes it impossible to look away.

The Gang does it all – singing and dancing, walking into the carnival as suckers – oh, wait, customers– and taking it down as revolutionaries. But the house always wins, and why anyone is willing to take this bet is more and more difficult to understand as the action progresses.

Focused on the financial crisis and housing bubble of 2008, the first act feels a bit historical, but the second act features the lingering effects and the downshift of the economy, the total disenfranchisment of the middle class and on the next crisis being created. History doesn’t feel so far away.

Powerful actors Adam Bennett and Mary Eileen O’Donnell take on multiple roles with equal grace, and everyone in the ensemble supports with tremendous energy.

Like “Harlequino,” the Gang’s production of last season, this is a show that uses dark humor and terrifying truths to inspire you to action. If you leave the theater wondering what you can do to make the world a better place, then it works.