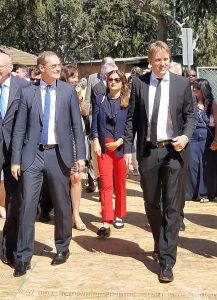 Mayor Cooper addressed the group and said, “As you can see, this building is undergoing a major transformation. We are excited and look forward to welcoming everyone back to the Wende Museum and to Culver City when the project is complete.”

Recognizing The Wende Museum’s growing stature since its founding in 2002, the City of Culver City provided the 1949 National Guard Armory building and grounds to the Museum for 75 years. The Museum’s vision is to seize the opportunity provided by the move to the Armory in 2017 to fully implement its experimental approach to making the history of this period relevant to today’s audiences.

“Thousands of kilometers from Berlin, the Wende Museum has put together a very impressive collection that is unique in size and type. The Wende Museum is keeping the history of the Cold War alive, helping to ensure that the past is not forgotten,” said Mayor Müller.

The Wende is home to one of the world’s largest collections of art and artifacts from East Germany and the rest of the Soviet Bloc. Housed for the past 12 years in an office park in Culver City, where only a small percentage of its collections could be displayed, the launch of the Wende at the Armory will put over 100,000 pieces of art and artifacts on display for curious viewers and dedicated scholars alike. The new, historic one-acre campus will feature 13,000 square feet of storage and exhibition space. The location will offer visiting hours Wednesdays through Sundays, free admission, a full program of innovative exhibitions and events, a sculpture garden, and state-of-the-art open-access collections storage.

The Wende’s vast East German collection includes reminders of a once-divided Berlin, such as the pieces of the Berlin Wall on view on Wilshire Boulevard, the archive of a Checkpoint Charlie border guard, and a top-secret map of Berlin used by East German border troops in preparation for a possible occupation of West Berlin.

Justinian Jampol is the Founder and Executive Director/Founder of The Wende Museum. The new location of the Wende Museum is scheduled to open in the near future. For more information about The Wende Museum, please visit http://www.wendemuseum.org/.