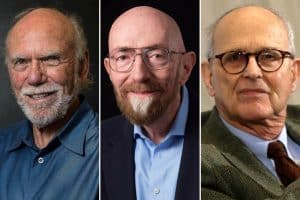 On September 14, 2015, the National Science Foundation (NSF)-funded LIGO made the first-ever direct observation of gravitational waves—ripples in the fabric of space and time predicted by Albert Einstein 100 years earlier. The public announcement took place on February 11, 2016, in Washington, D.C. Each of the twin LIGO observatories—one in Hanford, Washington, and the other in Livingston, Louisiana—picked up the feeble signal of gravitational waves generated 1.3 billion years ago when two black holes spiraled together and collided. Two additional detections of gravitational waves, once again from merging black-hole pairs, were made on December 26, 2015, and January 4, 2017; and on August 14, 2017, a fourth event was detected by LIGO and the European Virgo gravitational-wave detector.

The detections ushered in a new era of gravitational-wave astronomy. LIGO and Virgo provided astronomers with an entirely new set of tools with which to probe the cosmos. Previously, all astronomy observations have relied on light—which includes X-rays, radio waves, and other types of electromagnetic radiation emanating from objects in space—or on very-high-energy particles called neutrinos and cosmic rays. Now, astronomers can learn about cosmic objects through the quivers in space and time caused by changes in gravitation.

The Nobel Prize recognizes Weiss, Barish, and Thorne for their “decisive contributions to the LIGO detector and the observation of gravitational waves.”

“I am delighted and honored to congratulate Kip and Barry, as well as Rai Weiss of MIT, on the award this morning of the 2017 Nobel Prize in Physics,” says Caltech president Thomas F. Rosenbaum, the Sonja and William Davidow Presidential Chair and professor of physics. “The first direct observation of gravitational waves by LIGO is an extraordinary demonstration of scientific vision and persistence. Through four decades of development of exquisitely sensitive instrumentation—pushing the capacity of our imaginations—we are now able to glimpse cosmic processes that were previously undetectable. It is truly the start of a new era in astrophysics.”

“The prize rightfully belongs to the hundreds of LIGO scientists and engineers who built and perfected our complex gravitational-wave interferometers, and the hundreds of LIGO and Virgo scientists who found the gravitational-wave signals in LIGO’s noisy data and extracted the waves’ information,” Thorne says. “It is unfortunate that, due to the statutes of the Nobel Foundation, the prize has to go to no more than three people, when our marvelous discovery is the work of more than a thousand.”

“I am humbled and honored to receive this award,” says Barish. “The detection of gravitational waves is truly a triumph of modern large-scale experimental physics. Over several decades, our teams at Caltech and MIT developed LIGO into the incredibly sensitive device that made the discovery. When the signal reached LIGO from a collision of two stellar black holes that occurred 1.3 billion years ago, the 1,000-scientist-strong LIGO Scientific Collaboration was able to both identify the candidate event within minutes and perform the detailed analysis that convincingly demonstrated that gravitational waves exist.”