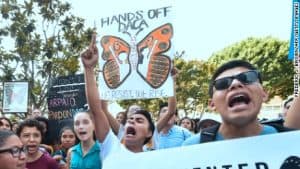 In an effort to remove the cloud of uncertainty that hangs over the heads of thousands of young Californians, a key Senate committee today is expected to vote on a $30 million emergency plan to provide them legal and financial assistance.

The Senate Budget and Fiscal Review Committee will vote on the plan, a combined effort by Gov. Brown’s office and the leadership of both houses, to aid residents here under the Deferred Action for Childhood Arrivals program.

The money would pay for immigration services to help those facing uncertainty about their ability to remain in the U.S. after last week’s order by President Trump to end the Obama-era program unless Congress approves a replacement. Those programs include the California DREAM Loan Program and emergency aid for college students.

The financial support for DACA recipients will come from $20 million in additional funding for immigration legal services under the One California program. This new funding will be specifically targeted to assist DACA recipients.

This $10 million in funding is for a “safety net” for DACA students should they become unable to work to support their education. The money would be available immediately on passage of the measure, known as SB 115 in the Senate AB 130 in the Assembly.