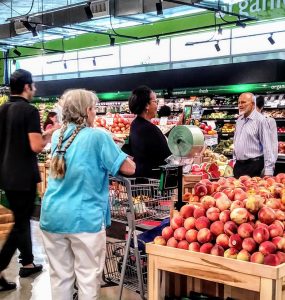 Just a block from the EXPO station and across the street from the former Surfas is Culver City’s newest community-owned natural foods grocery and deli. Featuring fresh, organic, local foods and products, the Coopportunity Market and Deli opened to lines of customers at the Saturday Grand Opening. Many bought memberships in the 43-year–old cooperative, founded in a Santa Monica garage well before natural food stores like Whole Foods, Trader Joe’s and Wild Oats appeared on the scene.
In August 1974, four people, one of whom dealt in herbs, signed up 20 people interested in forming a cooperative to sell products in the burgeoning field of natural foods. While the concept of co-ops is attractive in small towns across the country, their store was the first to offer the Los Angeles area  natural, organic and local foods. Their growth was phenomenal, reaching 800 members in 1976, when they expanded to their store on 15th and Broadway. After a rough spot in the 80s from growing pains, they have steadied in to strength and earned $24 million last year.
“Anyone can shop here,” said Manager Paula Heifner, “but members get privileges of ownership.” These include special discount days, coupons, offers, random raffles and a year-end refund based on annual profits. Membership costs $25 a year. Those who reach $300 become lifetime members.
Run by a Board of Directors from members of the Coopportunity community, the Co-op designates profits to go to several projects helping local kids learn to garden, an academic tutoring program for homeless kids and a low-cost organic market in a low income area to allow residents to eat well.
The’ Co+op’ grew to 11,000 members last year and its first offspring, in Culver City, has been a success since it opened this year, Heifner said. Culver City will add 200 employees to the Co+op operation, a far cry from the original 20 who worked as volunteers to keep the small store open three days a week, five hours a day.
Now open 7 a.m. to 10 p.m. daily, Culver City customers enjoy 90 minutes of free underground parking.
One of the founders, David Thompson, has written a history of the Coopportunity Market and Deli called, “The Rise of a Community-Owned Market,” available at both stores for a $10 donation to their Community Funded Projects.
The Culver City Community Market and Deli, 8770 Washington Blvd includes a deli open 7 a.m. to 9 p.m. Call 323.746,2899 for information. Parking is off Washington Blvd, on Level 2, two turns to the left and straight ahead to the Coopportunity Market banner.