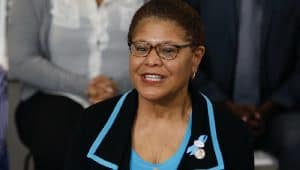 On September 5,  Rep. Karen Bass (D-Calif.) offered a series of amendments to H.R. 3354, an omnibus appropriations bill that includes Fiscal Year 2018 spending for federal transportation priorities. The amendments, put forward in the House Rules Committee, were an effort to minimize the continuous and rampant noise caused by low-flying airplanes in neighborhoods throughout Los Angeles.

“The main focus of my amendments is to require the FAA to provide resources to address noise reduction on aircrafts and to increase funding research, development and the implementation of air traffic noise reduction technologies,” Bass said in her testimony before the committee. “Congress must take action to address airplane noise and its harms. Increasing airline efficiency must not and cannot require the sacrifice of health and well-being of those on the ground.”

Rep. Bass has worked on this issue for years, convening meetings between constituents and representatives of the FAA, pushing for more reliable noise monitoring systems, and advocating for legislation that will reduce and ultimately end the noise that prevents constituents from enjoying being in their own homes. More than that, rampant airplane noise sinks property value and makes it difficult for residents with home businesses to be successful.

“Those involved in filming, a major driver of economic activity in my district, have reported that the constant noise makes it impossible to use some locations, including movie studios located under one of the flight paths,” Bass continued. “Volumes of health studies document the harm to human health from elevated noise levels, including increased incidence of high blood pressure and heart disease. Sleep disruption and deprivation from noise can have devastating effects, especially on developing children, the ill and the elderly.”

Existing technologies can be used right now to reduce some of the noise that planes make, especially during take-off and landing. Rep. Bass proposed both incentives to encourage using these technologies and a mandate that FAA support the development and implementation of these technologies.
Rep. Bass introduced amendments to incentivize small business outreach to encourage their assistance in developing new technology. There have been reports of very promising prototypes that could have huge impacts on noise generation.
The U.S. lags behind most of the industrialized world in dealing with the health effects of noise on our population. The current FAA noise standard is set at an arbitrarily high level that is not supported by health research. Rep. Bass introduced amendments that would assess and reevaluate decisions on noise and health.
“These amendments are a direct result of conversations and townhall meetings I’ve held over the last years.” Rep. Bass said after the hearing. “This is what the people in my district have asked for. This is what they need, and I’m proud to continue the fight.”

It is now up to Republican leadership to allow a final vote on these amendments.