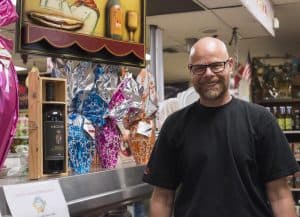 Vera, whose father served 12 years on the City Council from 1992-2000 and from 2002-2006, said he hopes to give back to the community that supported him and his family through good times and bad.

Born in Culver City, Vera attended St. Augustine Elementary School and St. Bernard High School, while helping his parents, Albert and Ursula, in their landmark Sorrento Italian Market on Sepulveda Boulevard. He served for 15 years as a Culver City Police Department reserve officer, while continuing to help run Sorrento, during which time he got married and had a daughter, Alexandria.

Vera’s brother died suddenly and his mother began what would turn out to be a terminal illness. Vera’s marriage began to crumble, and he turned to drugs. After several run-ins with the law and time in jail, he checked into a rehabilitation center and emerged sober and reinvigorated.

“That was a dark time, but I learned a great deal about both myself and my community,” he said. “Everyone in Culver City was so supportive of me and my family that I knew, even then, that I wanted to give back to this city.”

Vera returned to Sorrento, caring for his dying mother while at the same time running the day-to-day operations of the family market and the Veras’ extensive ranches near Lindsay, California after his father’s death in 2010. His mother, Ursula, died a year later, and since then, Vera has continued to run and improve the family businesses.

“I am anxious to bring my business experiences to City Hall,” Vera said. “We need to be smart about our city’s finances, but we also have to focus on important issues like attainable housing for working professionals, public safety for all of our residents and intelligent ways of dealing with traffic, transportation and mobility.

“We need to move our city forward by working together to address our challenges and take advantage of the opportunities we have before us. We need to balance economic development with the special qualities that make Culver City unique. I know that I can do that.”

The Sorrento market retains its old-world charm, but Vera has made numerous upgrades and improvements, including the introduction of new imports from all over Italy and the creation of what has become one of Southern California’s finest Italian wine departments.

He has also taken over the family’s 26 ranches encompassing thousands of acres and emphasized the production of olive oil. Vera Ranches also produces a wide array fruit and vegetables, which Vera oversees personally with weekly visits to the ranches about 45 minutes north of Bakersfield.

Vera has maintained the broad philanthropic efforts undertaken by his father, something he said has shaped his attitude toward how the city should be run.

“We need to look out for everyone who calls this city ‘home,’” Vera said. “Culver City should be a safe and welcoming environment for families at all levels of the economic spectrum, and I am committed to making sure our schools, our police department, our fire department and our parks system have the tools and resources they need to create that environment.”

Vera is a member of the Culver City Exchange Club and has served on both the Culver City Landlord/Tenant Board and the Culver City Civil Service Commission, where he currently serves as part of the five-member commission charged with advising the City Council on all matters concerning Human Resources administration.

For more information about Vera and his campaign, please visit www.veraforcouncil.com.