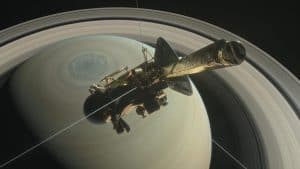 NASA’s Cassini spacecraft is just days from its mission-ending dive into the atmosphere of Saturn. Its fateful plunge on Sept. 15 is a foregone conclusion—an April 22 gravitational kick from Saturn’s moon Titan placed the two-and-a-half ton vehicle on its path for impending destruction. Yet several mission milestones have to occur over the coming two-plus weeks to prepare the vehicle for one last burst of trailblazing science.

“The Cassini mission has been packed full of scientific firsts, and our unique planetary revelations will continue to the very end of the mission as Cassini becomes Saturn’s first planetary probe, sampling Saturn’s atmosphere up until the last second,” said Linda Spilker, Cassini project scientist from JPL. “We’ll be sending data in near real time as we rush headlong into the atmosphere—it’s truly a first-of-its-kind event at Saturn.”

The spacecraft is expected to lose radio contact with Earth within about one to two minutes after beginning its descent into Saturn’s upper atmosphere. But on the way down, before contact is lost, eight of Cassini’s 12 science instruments will be operating. In particular, the spacecraft’s ion and neutral mass spectrometer (INMS), which will be directly sampling the atmosphere’s composition.

In its final week, Cassini will pass several milestones en route to its science-rich Saturn plunge:

Sept. 9 — Cassini will make the last of 22 passes between Saturn itself and its rings—closest approach is 1,044 miles above the clouds tops.

Sept. 11 — Cassini will make a distant flyby of Saturn’s largest moon, Titan. Even though the spacecraft will be at 73,974 miles away, the gravitational influence of the moon will slow down the spacecraft slightly as it speeds past. A few days later, instead of passing through the outermost fringes of Saturn’s atmosphere, Cassini will dive in too deep to survive the friction and heating.

Sept. 14 — Cassini’s imaging cameras take their last look around the Saturn system, sending back pictures of moons Titan and Enceladus, the hexagon-shaped jet stream around the planet’s north pole, and features in the rings.

Sept. 14, 2:45 p.m. PDT — Cassini turns its antenna to point at Earth, begins a communications link that will continue until end of mission, and sends back its final images and other data collected along the way.

Sept. 15, 1:37 a.m. PDT — The “final plunge” begins. The spacecraft starts a 5-minute roll to position INMS for optimal sampling of the atmosphere, transmitting data in near real time from now to end of mission.

Sept. 15, 4:54 a.m. PDT — Cassini’s thrusters are at 100 percent of capacity. Atmospheric forces overwhelm the thrusters’ capacity to maintain control of the spacecraft’s orientation, and the high-gain antenna loses its lock on Earth. At this moment, expected to occur about 940 miles above Saturn’s cloud tops, communication from the spacecraft will cease, and Cassini’s mission of exploration will have concluded. The spacecraft will break up like a meteor moments later.

“The end of Cassini’s mission will be a poignant moment, but a fitting and very necessary completion of an astonishing journey,” said Earl Maize, Cassini project manager at JPL.