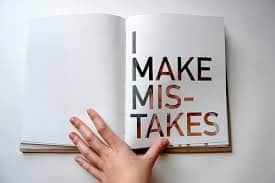 Obviously I make mistakes. It’s part of being human. We are designed this way it turns out. Yes, I lose my keys, even though I have a certain spot, and most of the time my keys make it there. I forget appointments occasionally by forgetting to put them in my calendar immediately. I am usually 5 to 10 minutes late and I really work on that, yet somehow my distraction issues make being on time very difficult.

I know some of you are reading this and thinking, “my god!” because you don’t suffer with making these sorts of mistakes. But don’t judge. You make other mistakes. I know you do. Do you try and keep them secret? Would it perhaps be easier if we had signs that told one another our flaws? That way no one could keep secrets, everyone would know everyone else’s challenges. Could we then judge one another? Probably. We humans love to compare and complain.

What if we came out of the womb with an attached sign that said,
Warning: These (fill in the blanks) are this human’s flaws. They will make mistakes. Parts of their human journey will be hard. Love them deeply and teach them well.

Perhaps then we could accept our mistakes? We could know ahead of time, these are going to be our challenges and seek support to deal with our flaws.

But this last weekend, I really made a mistake. Oh boy. I wished I hadn’t, but I did. I wish I was perfect sometimes, but I’m not. I hate the pain of making a mistake that I characterize as large. I need you to know however, that my three friends who witnessed my mistake, didn’t think it was such a big deal. However others thought it was fairly significant. And those people may have taken offense by the way, because of their own story about how people should conduct themselves.

My mistake? What came out of my mouth. I often say things and think, “I can’t believe I said that!” I really make HUGE mistakes with my mouth. I’m one of those people who puts it out there, who takes risks. Oi vey. geez. I don’t EVER mean to offend anyone. I don’t mean to put my foot in my mouth, but I’m challenged with saying impulsively what comes to me, as if the edit button were nonexistent in that moment. Or I say something out loud because I’m actually processing my thoughts and instead of keeping those thoughts in my mouth, and they come out as a stream of consciousness that doesn’t seem very appropriate. Sometimes I make a joke and it flops. Oy vey. No one laughs. No one thinks “that” was funny!

Sometimes I say things that unknowingly just piss people off. I have an opinion someone doesn’t like. I make people angry with my opinions. Is that a mistake? No. But it often feels like one, since I’m sorry I’ve offended or made anyone angry. What is that about? Why am I sorry? Why can’t I make someone angry? Is that always a bad thing? Why am I responsible for what everyone thinks and feels? Oi vey.

I feel lost in a web of shame, guilt, embarrassment, and I can’t find my way out. Even with my friend’s assurances, I can’t seem to totally let my mistake go. We’ll even laugh about it eventually, which helps. They remind me that of all the mistakes in the world, this isn’t the worst one, even if others didn’t like it. Even if some people leave their relationship with me, that is beyond my control. And therefore, I have to allow whatever happens to happen. If another can’t forgive and see past my mistakes, that is their story. Not mine. I need to forgive myself and learn from my mistakes, knowing that I’ll get better, but never perfect.

Mistakes are unavoidable. And with a quality so common with every human, why are making mistakes so difficult for us to accept, allow and forgive? Perhaps it’s our “be perfect, don’t let them see you sweat” sort of Western mentality. But perfection isn’t peace. And there can be no peace with the idea of trying always to be perfect.

I didn’t have peace for a few days after the mistake. The pain of it eased as I counseled with friends, confessed my story to others, wrote this blog, and really let time go by. It’s not that I wouldn’t want to be able to erase the mistake, but I can’t. What I can do is to love myself through it anyway. Love and hold myself deeply. And be open with compassion when others make mistakes around me.