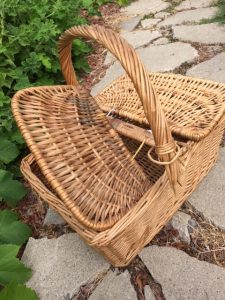 When I heard that crackling sound, I did not have to wonder what it was; my picnic basket had broken. Considering that it’s older than my children, and has had a life far more adventuresome and active than most picnic baskets, it was time. Of course, there’s been all these deaths, and the past seems to be ending in some definitive ways.

It attended more than fifteen years of summer concerts at City Hall, climbed the paths through Topanga and Temescal Canyons as well as every beach in So Cal, nestled in trunks of Volvo, Toyota, Ford and Infinity. It has carried every kind of picnic from the packages of crackers and juice bottles that toddles delight in to the ultra gourmet Cristal and caviar menu. My picnic basket can look back on a long and lovely life.

I’ve actually had eight deaths in four months, and while four of them have been people I’ve been close to for years, the other four were people who were very close to people I’m close to. It’s the math of living in a small town; if you don’t know someone, you know someone who knows someone. The sense of loss is pervasive. Grief is heavy and it’s a lot to carry.

It wasn’t that I didn’t connect the sound of the breaking wicker to the age of the basket or the weight inside. It wasn’t surprising, but it was still shocking. I suddenly started to cry, and I simply couldn’t stop. Every sad thing that I’ve been through seemed to need to pour out of my eyes in an instant.

All my carefully cultivated cool left building without me, and I was a soggy, sobbing mess. Holy wow, I thought – I’m a basket case.

The phrase originated post-WWI as a description of returning soldiers who had lost both arms and legs, and had to be transported in a basket, so the reference was one of being physically helpless. It wasn’t until after WWII that it came to mean someone with emotional problems.

The band Green Day has a song called ‘Basket Case’ written by lead man Billie Joe Armstrong about the undiagnosed panic attacks that made him think he was losing his mind. I couldn’t be more sympathetic.

Last week when I suspected that I was having a heart attack, I found a friend to drive me to the emergency room, because I needed someone else to decide if I was having heart attack – it’s out of my range of specialization. Emergency room staff are pretty chill – you kinda figure they have seen it all- but when they asked me about stress and I mentioned the number of deaths I’d been touched by in the last few months, eyebrows went up. I was surprised that they were surprised. Even the professionals thought this was a lot of death.

While I was in the ER, someone died. Gratefully, it wasn’t anyone I knew.

I was very glad to be told I was not having a heart attack. But that I was having a panic attack so severe I was wondering if the guy with dark hoodie and the scythe was waiting for me in the hallway, also not really ideal.

The day I went to the ER, it was only seven. Death number eight was last weekend. I feel like broken wicker.

But in the moments after the handle cracked and snapped, when I had gotten a few deep breaths down into my lungs and let some steam out of my nose, I was able to stop crying. I wiped my face with one of my vintage linen napkins, and did what anyone would do – I picked it up from the bottom, hoisted it up to my heart, and carried my basket where I needed it to go.