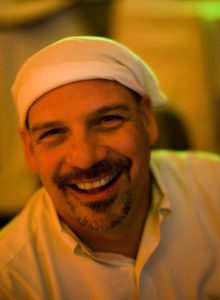 “We are the lucky ones,” Henry Merritt liked to say. Henry loved to tell stories about growing up in New Orleans, and his favorite quotation from his grandfather was one that often polished the end of the anecdote. “He would remind me- we are the lucky ones.”

And, to be completely SoCal about it, how lucky were we, to have Henry in our midst all this time?

Henry and I met at preschool, part of the ever growing La Playa Preschool Co-op at the Stone House in Lindberg Park. Since we both chose the same work shift, we spent every Wednesday morning for the better part of three years hanging with the kids; three and four year olds, playing in the sand box, splattering tempura paint, climbing on the cubes. La Playa works on the basis that one parent has time to be with the preschooler, and Henry was on the papa shift while Wendy was doing the nine to five.

Work assignments rotate and since my favorite work station was art (Let’s try painting your hands blue and then paint the paper with your hands) and Henry was happy to supervise the cubes, we were often in the yard together. Henry was encouragement in person. “C’mon, you can do it!” I watched as numberless toddlers learned to climb the ‘cubes’ – the thick plastic structure we assembled every morning into a new shape – under his care.  If you needed a spotter, he was right there for you, arms outstretched. If you were a jumper, he’s catch you coming down. Too shy to climb? Henry might just climb with you and find a spot to sit, halfway up,  until you felt like you could do it on your own.

A few years with Henry at La Playa, and you might even be persuaded that you could climb higher than you thought.

Once when Henry asked me to cover a shift (there was a protocol for trading days or paying) and I had guests coming from out of town, I got the ultimate deal – Rather than pay me, I asked, can I get dinner for five? Well, he laughed, what would you like? It was a meal so good I still remember it;  a perfectly roasted chicken with a rice and pine nut stuffing, spinach salad with homemade croutons, and peach and blueberry cobbler. My guests were thrilled, and all I had to do was open the wine.

While Henry was a great Dad, a great dancer (a dance scholarship to college was what originally got him to from NoLa to LA) and a great guy, Henry was a gifted chef. Of all the things that made Henry happy, there were few better than cooking. At any party, seeing that smiling face come through the door, carrying platters in his chef’s whites, I knew things were about to get delicious. I realized years ago that I was just never going to get tired of eating his tequila-marinated salmon, a relaxed and happy marriage between two of my favorite flavors.

Speaking of marriage, from what Henry told me, it was Wendy’s mother’s work as a piano teacher that created the original introduction between Wendy and Henry. See what happens when you introduce your children into the arts? Wonderful things, truly wonderful things.

I can’t t recall the exact occasion – I may have been ordering food, or maybe just borrowing tablecloths – but Henry had just finished uploading what seemed like the entire collection of every American jazz piece every recorded onto a sound system to play into his working kitchen.  I couldn’t resist a tease and a bit of a test.

“Of course!” He hit a button and we were taking five.

“Django?'” He hit a button and we were surrounded by gypsy guitars.

“Ella?” He hit a button and there was that voice, scatting softly through a set.

We looked at each other and smiled. “You know, you know,” he laughed, ” you don’t even have to ask,” and were we listening to Louis Armstrong singing to us in that great, graveled tone- what a wonderful world.

For Henry Merritt to leave the party so soon is tragic, and he will be missed by many. To have known him as long as we did – well, it’s true.

We are the lucky ones.