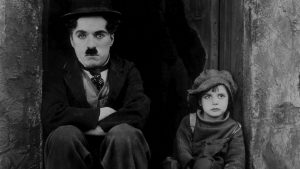 The figure of Charlie Chaplin’s The Tramp was known globally in Chaplin’s day, and remains one of the most iconic figures in movies. Few have reached as many people as Chaplin did with The Tramp. A Chaplin/Tramp costume character strolls Hollywood Boulevard today. We know the figure, but do we know the character?

The Tramp seems to always be in the midst of some crisis which is resolved through humor, ingenuity, sometimes force, but the end is always the same: to do right.

His early shorts remain some of the freshest movies produced, whose humor still cause uproars of laughter. His longer features have The Tramp, and other characters which are not always charitable, such as a dictator or a serial wife killer.

The live screening the Chaplin’s early masterpiece “The Kid,” in which The Tramp, through Fate, is faced with a situation of tremendous sacrifice and caring, which he confronts through grace and courage. The movie will be accompanied by a new score by Craig Safan, performed live by the Marina del Rey Symphony, Frank Fetta-Condcutor.

Here is a perfect way to discover Chaplin’s Tramp, or if it’s been a while, rediscover an icon of movies in the beautiful park along the water. The second Symphonic Thursday presents a live screening of Charlie Chaplin’s early masterpiece, “The Kid,” with a new score by Craig Safan, Safan Bio. performed live by the Marina del Rey Symphony, Frank Fetta, Conductor.

Also on the program is the Ultra-Romantic Violin Concerto by Erich Wolfgang Korngold with Will Hagen soloist, Hagen Bio. In addition to his concert works, Korngold was one of Hollywood’s most influential film composers whose style continues to influence film scores of today. The film scores of John Williams for “Star Wars’ owe much to Korngold.

A new tent graces the park. It is larger, roomier, straight lines, right angles and a flat top. To some it is Modernistic, a good thing, and to others reminiscent of a Ancient Grecian Temple (to music), also a good thing. We like it. Photos of the new tent are on our website:
www.culvercitysymphony.org