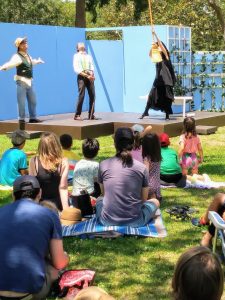 It’s been 19 years since a group of folks banded together to entertain the community in Carlson Park with free plays performed in the summer heat. This year, they’re paying Culver City back for its support by presenting five original plays scripted to celebrate its Centennial.
“I thought Romeo and Juliet would reflect the heart of Screenland for the mainstage performance,” said CCPT board president Laura Boccaletti, “except I wanted a happy ending.” Enter playwright Nakiska Aschtiani, who volunteered to incorporate Shakespeare’s plot with a happy tweak and set it in the heyday of Screenland. She poured over City Historian Julia Lugo Cerra’s comprehensive book Culver City, California: The First Hundred Years as a reference.
“It’s set in 1917,” Boccaletti said. “A very clever love letter to Culver City.”
Playwrights for the Children’s Popcorn Theater had to include at least one character from the iconic Wizard of Oz story famously filmed in Culver City.

Some 100 fans gathered on the grass on the south side of popular Carlson Park to kick off the 2017 season with the Children’s Popcorn Theater. A cast of four presented four original plays, each with one or more characters from the Wizard of Oz, famously filmed here. They begin with an homage to silent movies, Scarecrow and the Salesman by Christopher Gough, skip to The Way to Oz by Daniel Loftman Hurewitz, than a Toto Too sketch by Jen Huszcza and end with Lost in Screenland by Morna Murphy Martell.
After a break, a new cast presented Shakespeare’s star-crossed lovers tragedy crafted into a plot between rival studios Montague and Capulet battling to produce the next big film and actors scheming to be in it.
CCPT’s roots are in the 20th Century. From 1994 to 1998, a group called Theater in the Park produced annual summer plays in Carlson Park, said Eric Billitzer. When the first group folded, he was part of the group which took over, presenting Neil Simon’s Fools, Electra by Sophocles and The Fan by Carlo Goldoni as the Culver City Public Theater in 1999.

Text and pics by T.S. Owen