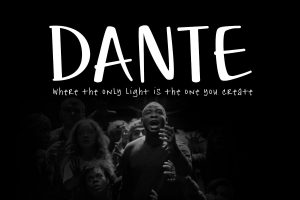 Join Get Lit – Words Ignite and The Actors’ Gang for a special performance of DANTE on Thursday, July 20 at 8pm with an exciting talk back afterwards and some free giveaways as well.

Penned by college student and Get Lit poet Raul Herrera, featuring the Get Lit Players and Literati Fellows, the musical adaptation of Dante’s Inferno explores the power of young voices in our current culture. Set in modern day Los Angeles, DANTE is about a young man’s second chance at redeeming himself, having to go through hell in order to confront his demons and realize that one can’t live and learn without making mistakes.

“DANTE asks young people to think about and dissect the world so that they can understand and improve it. The show is an incredible lesson in what young voices can create and do,“ noted Diane Luby Lane, founder and executive director of Get Lit – Words Ignite.

If you don’t know anything about Dante’s Inferno, this could be the perfect introduction. Traveling through deeper and darker circles of hell, a young man has the chance to consider suffering and sin in contexts that he has never before imagined. This epic poem is enchantingly transferred to a hip hop sensibility, and we see that things like corruption, lust and ambition haven’t changed all that much since the 1300’s.