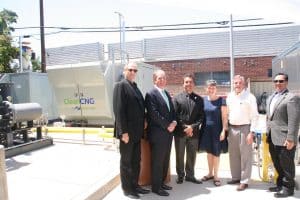 On June 21, 2017, Members of the City Council of the City of Culver City joined Transportation Department officials and representatives of Clean Energy to open the City’s newly upgraded compressed natural gas (CNG) fueling station. The event marked the completion of a $1 million facility improvement project, which included the replacement and installation of two natural gas compressors that will enable Culver City to more efficiently fuel its more than 100 CNG City vehicles.

Located within the City Transportation facility, the fast-fill CNG station will support the fueling needs of Culver CityBus, City refuse vehicles, and many other municipal vehicles that allow Culver City to have one of the cleanest fleets in the state. Culver City has operated CNG vehicles since 1998, and in 2004, Culver CityBus transitioned to 100% CNG fuel, becoming the first transit fleet in the South Coast Air Quality Management District to do so and the second in the State of California.

“This CNG fueling station is key to our commitment to sustainability and the environment,” said Culver City Mayor Jeffrey Cooper who toured the facility on June 27, 2017. “The City’s ability to utilize this station, a key component to clean transportation infrastructure, helps to improve air quality in Culver City and the region.”

“Culver City was an early adopter of natural gas, and the City and will continue to expand its use of natural gas, as the fueling station network increases,” said Paul Condran, the City’s Equipment Maintenance Manager. “The ability to use renewable natural gas makes the City’s continued commitment to be a leader in environmental stewardship that much easier. We believe using CNG fuel is a major step towards maintaining that philosophy,” added Transportation Director Art Ida.

“We are not only proud of the work we’ve completed here, but we also applaud the City of Culver City, for its commitment to looking for ways to improve air quality for residents,” said Peter Grace, Senior Vice President of Sales at Clean Energy. “This station will utilize renewable natural gas, one of the cleanest fuels available today, and will make the air cleaner for not only the nearly 40,000 Culver City residents, but for the hundreds of thousands of people who live, work, learn and play in the area.” This project was funded through grants from the South Coast Air Quality Management District, Federal Transportation Administration, and other grant sources.