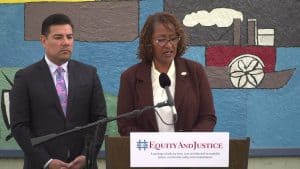 Specifically, Senate Bill 355 addresses the problem of innocent defendants being required to reimburse the courts for the cost of appointed counsel by specifying that this requirement may be imposed only in cases where the defendant is actually convicted of a crime.

“Under current criminal law, a low-income, homeless or impoverished person who is accused of a crime that they did not commit can still be ordered to pay the court for the costs of a court-appointed attorney,” Sen. Holly J. Mitchell said after the Assembly this week approved SB 355. “We are hopeful that Gov. Brown will support SB 355 and the rest of the bills in our package. Together, we can bring compassion, reason and greater social awareness about the true costs of a criminal justice system.”

SB 355 is the one of seven bills jointly authored by Sens. Mitchell and Ricardo Lara that largely addresses how California’s criminal justice system treats youth and young adults.

The governor has about two weeks to sign SB 355, veto it, or allow it to become law without his signature.