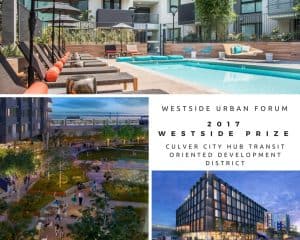 On Friday, June 9, 2017, the Westside Urban Forum (WUF) awarded the Westside Prize to the City of Culver City, Access Culver City, and the Ivy Station for Culver City’s Transit Oriented Development (TOD) District project known as “the HUB.” Culver City Mayor Jeffrey Cooper, joined by Vice Mayor Thomas Small and Council Member Meghan Sahli-Wells, accepted the Westside Prize on behalf of the City and affirmed the City’s strong commitment to revitalizing and reinvesting in the community by establishing TOD projects. “The City’s overall plan has been to create a higher density, transit-served neighborhood that improves regional mobility and air quality by reducing local reliance on the automobile. The City is also embarking on a Visioning Plan to build on the strengths of the TOD District, examining area mobility and circulation, and planning for the next decade and beyond for this area’s transit oriented development,” said Cooper.

The Westside Prize recognizes the HUB, which is the emerging transit oriented center around the Culver City Expo Station. Over the past decade the City and former Culver City Redevelopment Agency have engaged in a long-term plan of creating a mixed-use neighborhood adjacent to the Expo Station. With green building and best planning practices, the HUB project will be a center for employment, housing and environmental sustainability. It will feature a local market, hotel, restaurants, two public parks, modernized housing, creative office space, and tree-lined, walkable and bikeable streets—all adjacent to a public transit plaza.

“WUF hopes these developments will set a new standard and will usher in a new way of living in and moving around the region,” said WUF Board President Josh Stephens. “We encourage cities and developers to follow the extraordinary example set by Culver City, Lowe, and Greystar.”

The HUB is one of nine Culver City TOD projects, including Ivy Station and Access Culver City, which have been in the making for almost a decade and will contribute to nearly $1 billion of area reinvestment. “Today we are starting to see the fruits of our labor,” Cooper added. “We have developed strong partnerships with TOD developers and look forward to Lowe’s groundbreaking next month on Ivy Station.”