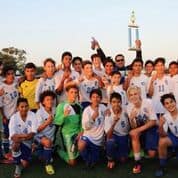 CCMS Soccer or fútbol continues to get better with every year. Parents have been supporting these kids since their early AYSO days. Now many of them are in competitive clubs and further developing their skills and talent. But to play for your local middle school continues to be a special kind of honor. All the hard work throughout the year culminates into a few short months where the players must get to know each other’s individual style and work as a team. Coach Lino Herrera has been guiding the soccer program at the middle school for 17 years and takes great pride in making sure he brings the best out of his squad. He is able to bond with the players and give them one on one attention to improve their game, and it shows.

This past Thursday, in the dusk hours of the day, the boys were confident but feeling the weight of the moment. In a few brief minutes the final would start on their home turf field in Culver City against another westside team Mark Twain.

At the whistle, Culver City immediately maintained possession and squeezed out the first goal by Hayden Brown. The stands erupted! From that point on Culver City showed their dominance on the pitch. Drive after drive, the team inched closer to the net all led by center midfielder Kevin Arenas and passing it off to striker Gabriel Mejia. In the middle of the first half on a breakaway, Javier Mata dribbled in from the right side of the penalty box and scored an extremely difficult angled shot, top right corner. GOOOOL! For the remainder of the half both teams fought hard on the field. By halftime Culver City was leading 2 – 0.

Second half, Coach Lino made a few changes and appeared to want to cement a stronger lead in the game. Mark Twain came out aggressive in the first half, and scored their first and only goal. Culver City got their bearings quick while Jake Aigner and Miles Nightingale made some great plays on the pitch. Off a quick throw-in and even quicker pass, Gabriel Castro, ever the aggressive player, slammed in a shot past the goalie. The pitch was filled with excitement as the players congratulated their team captain. Mark Twain fought back fending off several more attempts at goal. When Mark Twain formed an attack, Nicolas Flores defensive stopper and Goalie Jesper Giardino were there to defend for Culver City. Towards the end of the second half at a score of 3 – 1, substitutions were made.

Only seconds into the game, Nico Gonzalez-Cortez sprinted past the defenders, shifted left and scored. Top bins left corner! The crowd went wild as the feeling of a win was drawing near. More players were substituted in to get their moment to shine, namely Irving Mateo and Carlos Martinez Lopez. As the sun lowered past the horizon the final whistle blew. Culver Won with a 4 – 1 final score. The team ran out to the field, shouting and cheering! Emotions ran high and players embraced feeling the joy of that moment.

For a student to win the final, especially a young middle schooler, it’s a moment of pride and jubilation. All their efforts are displayed on the pitch leading to a final moment that many will remember for years to come.

To watch a video of the game, go to https://youtu.be/QiPSymihRT4