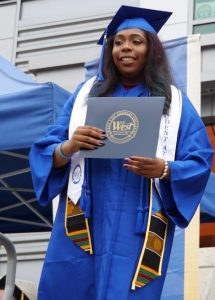 Culver Pride is exemplified in classrooms, on the field, in neighborhoods, and this spring as commencement season rolls around, Culver Pride is undeniable at graduations. On Tuesday June 6, West Los Angeles College graduated its 2017 class full of Culver City High alumni who embody the essence of excellence in Culver City community.

This year at West, over 1,100 students earned a certificate or Associate Degree. At the 49th commencement attended by close to 500 students, more than half of the students being honored have been accepted into at least one university. Lilli Keeve, Christina Gibson, (pictured left)  and Jesús Reyes are all products of Culver City schools and will be transferring to four-year universities in the fall, having completed general education requirements at West.
Keeve, an avid writer and film enthusiast, graduated from Culver City High in 2014. She recalls that after graduation, she wasn’t really sure what she wanted to do after that.
“I wasn’t ready to go to a regular university. Right out of high school in summer of 2014, I felt scared and nervous for what would come next,” said Keeve.
Keeve decided to enroll at West. With the academic support of her counselors and student groups on campus, Keeve was able to excel academically. She worked as an English tutor in the library, pushing her closer to her goal of being a writer and filmmaker.
“It was a very informative and altering experience,” said Keeve.
In the fall, Keeve will be off to Portland State University to study English. “I’m happy to be transitioning into the next phase of my journey but I couldn’t have done it without the kind and generous nature of West LA staff and faculty,” she said.

At Culver City High, Christina Gibson was a standout on the court and in the shot put ring but in the classroom “I was good, just good. Not 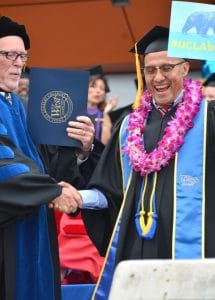 great or an overachiever. However, by me not being an overachiever in my class the same way I was in my sport, it made certain decisions (university choices) become extremely limited,” said Gibson.
Similar to Keeve, Gibson thought it was best to take time and sort out any issues or doubts close to home at West where she continued to play basketball and flourished academically.
“Coming to West allowed me to grow and mature into a better student and athlete,” said Gibson. “It’s better to figure yourself out here at a community college first then to go straight into a four year college/university with no plan. It’s a way better decision for your future and finances,” said Gibson.
Jesus Reyes’s story looks a lot different from the traditional student. Reyes’s first language was not English, he was managing a learning disability and he is in his fifties.
Jesús Reyes (Picture right with WLAC President Dr. Jim Limbaugh) started his pursuit of a degree at the Culver City Adult School. He then enrolled at West where he experienced great academic and personal growth. In his final year, he served as Associated Student Organization (ASO) President. In the fall, Reyes will make UCLA home in hopes of going into a field that has provided him with life changing opportunities—education.
Not graduating this year, but also a part of West’s year end festivities was Culver City High alumnus Kyndahl Carter who was honored by the athletic department. At the annual Westpys, an awards ceremony for standout scholar athletes at West, Carter was recognized with the Coach’s Award and named to the Western State All-Conference First Team.
After the graduates moved their tassels to the right at Tuesday’s commencement, Keeve, Gibson, and Reyes move on to their next journey in life setting foot for Portland State, UCLA, and wherever else the world may take them.