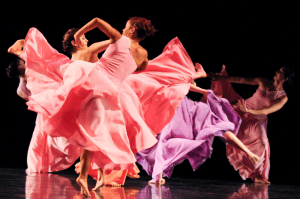 A collaboration nearly seven years in the making, this June VOX Femina Los Angeles is proud to partner with choreographer Sarah Swenson, founder of Vox Dance Theatre, for the world premiere performance of Fire Within!

Along with dancers Cheryl Banks-Smith, Tamsin Carlson, and Grace Privett-Mendoza, Swenson will provide dance accompaniment to VOX’s rendition of Fire Within Me, a choral arrangement by VOX’s Christina Wilson.

Swenson offered “It was a pleasure and an honor to accept this commission from VOX Femina…Fire Within has all the characteristics I love in a piece of music—a variety of meters and tempi, plus qualities of serenity, joy, and strength—all woven together into a strong, woman-centered affirmation.”

Sarah Swenson is a is hybrid choreographer whose neo-modern work is a fusion of pioneering modern dance genres, theatre, and improvisation. Her post-modern work has been influenced by American post-modern mavericks Simone Forti and Rudy Perez, with whom she has been working since 2004.

Sarah founded Vox Dance Theatre of Los Angeles, a company of women, in 2004. Her original choreography is steeped in the feminine experience, yet springs from themes of universal appeal. Her signature work, “Fimmine (Women),” premiered at the Toronto International Dance Festival, and is the centerpiece of Vox Dance Theatre’s repertoire.

This first ever dance commission was a gift from Pamela Privett & founding member Helen Mendoza, dedicated to the women whose shoulders we stand on, and for the young women who will make a difference.

VOX is thrilled to premiere Fire Within Me at Women on the Rise June 10th! Women On The Rise looks to the future with a dynamic new commission by composer Jocelyn Hagen, original choreography by Sarah Swenson & VOX Dance Theater, and graduates of VOX’s first Choral Scholar Program. Tickets to this fantastic season finale are on sale now!
Saturday, June 10, 2017
8pm
Zipper Concert Hall, The Colburn School
200 S. Grand Avenue
Los Angeles, CA 90012