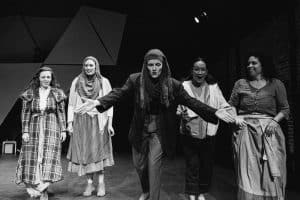 Directed by Tim Robbins and developed with The Actors’ Gang ensemble, Refugee Project responds to the millions displaced from war-torn Syria since 2011 by delving into personal stories of immigrants fleeing to escape oppression and violence. For these, we have turned to the actors in our nonprofit theater company, asking them to explore their ancestors’ immigrant journeys and bring those stories to rehearsal to develop into scenes for the stage.

Robbins noted “It’s been an interesting process because when we started it, a lot of people didn’t know their family histories and it led to some very interesting conversations with relatives … artists seeking dignity and to get out of the Eastern bloc, people fleeing the revolution in Iran, a woman escaping retribution after the American soldiers left Vietnam. The idea is to tell the story of why they left and who they were and why they came to the West for freedom.”

Click through on the ad on the right side of the page for ticket info.