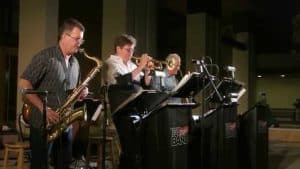 The Jazz Bakery’s Movable Feast series presents Gordon Goodwin and his Little Phat Band, on Friday, June 9th at 8PM at the Kirk Douglas Theatre in Culver City. Tickets are available at jazzbakery.org and at the door.

Even for a successful composer and arranger in Hollywood, Gordon Goodwin’s numbers are impressive: A 2006 GRAMMY Award for his Instrumental Arrangement of “Incredits” from the Pixar film The Incredibles, three Emmy Awards, and thirteen GRAMMY nominations.

A steady, persistent audio diet of the giants of jazz, pop, rock and funk has nourished Goodwin’s being since childhood. Count Basie, Duke Ellington, Buddy Rich, Thad Jones and Mel Lewis, Earth, Wind and Fire, and Tower of Power, among many others, filled the well for the music his band makes today. And like those other bands, Goodwin’s music is nothing less than astonishing when experienced live.

Goodwin’s ability to combine jazz excellence with any musical style makes his writing appealing to fans across the spectrum. That’s why both beboppers and headbangers dig Gordon Goodwin’s Little Phat Band.

The Jazz Bakery is building a Frank Gehry designed center for jazz next door to the Kirk Douglas Theatre. Since leaving its historic venue at the old Helms Bakery building in Culver City, The Jazz Bakery has presented its Movable Feast series at prestigious venues throughout Southern California.

This performance is made possible in part by a Culver City Performing Arts Grant with support from Sony Pictures Entertainment.