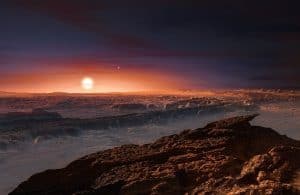 The quest to discover whether a planet orbiting our closest neighboring star, Proxima Centauri (4.2 light-years or 25 trillion miles from Earth), could support life has taken a new, exhilarating twist.

The planet was only discovered in August 2016, and is thought to be of similar size to Earth, creating the possibility that it could have an Earth-like atmosphere. Scientists from the University of Exeter have embarked on their first, tentative steps to explore the potential climate of this exoplanet, known as Proxima B.

Early studies have suggested that the planet is in the habitable zone of its star Proxima Centauri—the region where, given an Earth-like atmosphere and suitable structure, it would receive the right amount of light to sustain liquid water on its surface. Now, the team of astrophysics and meteorology experts has undertaken new research to explore the potential climate of the planet, towards the longer term goal of revealing whether it has the potential to support life.

Dr. Ian Boutle, lead author of the paper, explained: “Our research team looked at a number of different scenarios for the planet’s likely orbital configuration using a set of simulations. As well as examining how the climate would behave if the planet was ‘tidally-locked’ (where one day is the same length as one year), we also looked at how an orbit similar to Mercury, which rotates three times on its axis for every two orbits around the Sun (a 3:2 resonance), would affect the environment.”

Dr. James Manners, also an author on the paper added: “One of the main features that distinguishes this planet from Earth is that the light from its star is mostly in the near-infrared. These frequencies of light interact much more strongly with water vapor and carbon dioxide in the atmosphere, which affects the climate that emerges in our model.”

The team found that both the tidally-locked and 3:2 resonance configurations result in regions of the planet able to host liquid water. However, the 3:2 resonance example resulted in more substantial areas of the planet falling within this temperature range. Additionally, they found that the expectation of an eccentric orbit, could lead to a further increase in the “habitability” of this world.

TRAVELING AT THE SPEED OF LIGHT, a radio message from Earth could reach inhabitants of Proxima B in just 4.2 years. Whether it would be feasible—or desirable—to send such a message is another matter, and how that message could be designed to be understood by extraterrestrials is yet another.

But the fact that we can even ask such questions shows how far we have come in the 39 years since 1978, when Wisconsin Senator William Proxmire awarded his annual “Golden Fleece Award,” for “fleecing” the public, to the fledgling SETI (Search for Extraterrestrial Intelligence) program—resulting in this program being removed from the NASA budget. Today, nearly every major observatory on Earth is conducting searches aimed at detecting habitable distant worlds.