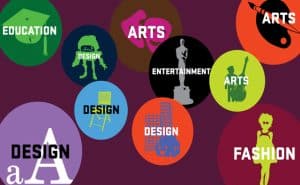 On April 11, 2017, the City Council received a presentation of “The Creative Economy Report of Culver City”, which is now available on the City’s website at www.culvercity.org/CreativeEconomyReport. This report, compiled by the Los Angeles County Economic Development Corporation (LAEDC), quantifies the economic impact of creative industries in Culver City over the past decade.

The City hopes that these findings inspire those in both the private sector and in government to consider the creative economy in future planning and programming efforts. The City also plans to use this knowledge to continue to help brand Culver City as a unique and attractive innovative hub. Staff appreciates the work of the LAEDC and our Cultural Affairs team to bring this report to life.

Kimberly Ritter-Martinez, an economist at the Kyser Center for Economic Research at the LAEDC, led the research and analysis for the report. According to the report, total direct income in the creative industries of Culver City amounted to nearly $1.1 billion in 2014, with “digital media” contributing 31 percent, or $330 million. The findings seemed to confirm the widespread perception of Culver City as a creative hub within Los Angeles County, as it was noted that Culver City’s creative industry employment level in 2014 was 14.4 percent—a full six percentage points above the Los Angeles region as a whole.

During the presentation to City Council at the April 11, 2017 City Council meeting, speakers cited several notable creative organizations and corporations in the City, such as Sony Pictures Entertainment, the Kirk Douglas Theater, the Movember Foundation, the Wende Museum, and The Actors’ Gang theater company. The latter’s Founding Artistic Director, actor Tim Robbins, was on-hand for the presentation to the Council. In the coming months, a list of short and long-term recommendations will be developed by a Cultural Affairs Commission subcommittee working with the City Council’s Economic Development subcommittee.