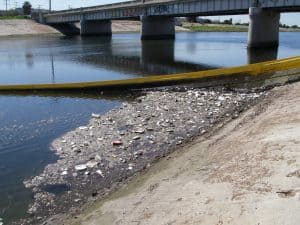 May 8, 2017, the City of Culver City became the 108th city in California to adopt a citywide ordinance that bans the use of Polystyrene foodware. Polystyrene, which is a synthetic polymer plastic that comes in two forms – foam (often mistakenly referred to as “Styrofoam”) and solid (straws, cutlery, coffee cup lids) – are commonly used by restaurants for take-out food orders.

The Polystyrene ban, which becomes effective on November 8, 2017, prohibits the sale of foam foodware, including coolers that are not encased in another material. All food establishments providing takeout food are prohibited from using solid and foam Polystyrene foodware products and are required to ask their customers whether they want cutlery included with their takeout order. Egg cartons, meat trays used for the sale of unprepared food, food prepared outside of the City, and foam packing materials used in shipping containers are exempt from the ban.

“One of the primary examples of the amount of Styrofoam waste can be found in Ballona Creek,” said City of Culver City Mayor Jeffrey Cooper. Ballona Creek, a focal point of the community, flows through Culver City as an open channel which drains stormwater and urban runoff within the 130-square-mile Ballona Creek Watershed to the Pacific Ocean. “Trash and other hazards, such as Styrofoam containers and cups, have entered Ballona Creek, breaking down into dangerously small particles, which pollutes the water that flows directly to the Pacific Ocean,” added Mayor Cooper. The City Council went even further in its efforts to prevent all types of trash that ends up in Ballona Creek by installing waste and recycling receptacles along the Creek bike path, as well as key areas within the Ballona Creek Watershed.

The City is conducting a comprehensive outreach program over the next six months, including a series of workshops with food providers, geared toward explaining the ban and identifying alternative foodware products and their suppliers. The first workshop will be held at 9:00 AM on Wednesday, June 28, 2017 in the Mike Balkman Council Chambers at City Hall. For more information about the ban and to view a list of upcoming workshops, please visit www.culvercity.org/polystyreneban.