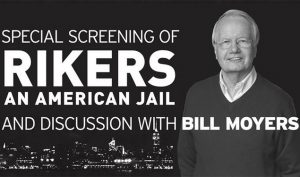 Actors’ Gang Theater is hosting a special benefit screening of Rikers: An American Jail, on Monday, May 15 at 8:00 pm,. A conversation with award-winning journalist Bill Moyers, who oversaw the documentary, Academy Award winner Tim Robbins, and Chris Bisbano, a former Prison Project student, will follow the screening.

The event is the second of Actors’ Gang Axis Mundi 2017 season, a series of speaking events, lectures and documentaries intent on encouraging civic engagement and public dialogue.

RIKERS: An American Jail brings viewers face to face with men and women formerly detained at Rikers Island. Unfiltered testimonials describe a deep-seated culture of systemic violence and corruption that has long plagued the notorious jail. And these instances of violence, abuse, and corruption are common in jails across America, creating a broken system that detains the guilty and the innocent without distinction

“We are thrilled and honored to welcome Bill Moyers to the Actors Gang to present his new documentary, Rikers: An American Jail,” said Tim Robbins, Artistic Director of The Actors’ Gang Theater. “Mr. Moyers has long been an uncompromising, intelligent and dignified journalist who has provided a steady stream of insightful and groundbreaking reporting over the last 50 years. His integrity and wisdom have inspired many journalists throughout the years and brought his audience to a more enlightened and compassionate understanding of the world around us. It will be my extreme pleasure to join him and Chris in a post-screening discussion of his new film and the challenges that face us in this era of mass incarceration.”

Added Moyers, “The great films that Tim Robbins has made have given us all unforgettable insights into America’s twisted obsession with mass incarceration and the dignity of those who too often are the victims of it. But while many of us have turned from these stories, fact and fiction, at a loss to change the system, Tim has plunged in with the Actors’ Gang Prison Project to make a profound difference in the lives of hundreds of people whose spirits are trapped behind bars. It will be an honor to join Tim and Chris Bisbano in conversation about the criminal justice system and to lend support to the creative leadership that puts Tim in the vanguard on this issue.”