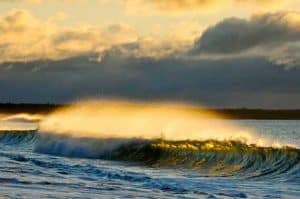 Scott Wyant loved to talk. He was a man who rarely paused in the constant flow of ideas, concerns, quotations, references and plans. When he did, it was a moment to paddle out again, find the next wave of thought, and ride it.

When I heard that Scott Wyant passed away yesterday, it was not unexpected. It was still completely unwelcome news, and I’ve spent hours sitting in darkness waiting for the dawn. Not that long ago, Scott would have spent that hour heading to the beach with his board.

I first met Scott when I was the editor at the Culver City News, and he came in to the office to place an awkward kind of personal ad. He had a friend – a former professor of his – who had gone missing, and he wanted to put his picture in the paper as another way of trying to find him. He was hesitant and reserved in his conversation, until I offered that I had lost a loved one to the streets because of mental illness, and then he dropped his guard and opened up completely. “He’s had a terrible struggle with his demons, and I’m afraid that his demons are winning.” When you admit to someone that your life has been touched by madness, you join a secret society.

Like cancer, it’s a club that no one wants to be a member of, but once you are, you find some amazing companions.

After many weeks of advertising, and checking back, I’d come to expect his Tuesday afternoon visits to my office. When he came to tell me that the professor had been found, there was no sense of relief, or that his mission had been accomplished. The man was determined to stay on the streets – off the gird, out of society – and Scott confessed that the demons had won. He was deeply discouraged, but I reminded him that as much as it hurt to know, it was not his battle to win or lose. All we could choose to do was to continue caring.

After I launched Culver City Crossroads, Scott was among the first to congratulate me, and even shyly offered to write for me. Since we were in agreement that the future could be whatever we chose to make it, he called his column “Looking Forward” after the utopian novel by Edward Bellamy, and adopted ‘Ted Bellamy’ as his nom de plume. This was before the policy of you-must-sign-your-real name went into effect, and if you put ‘Looking Forward’ in to the archive search, you can read all of these columns here.

But while Scott loved to talk, he was hesitant to write, and the column flickered on and off until it finally went dark.

I was very enthused about his run for City Council, and he showed his true colors by consistently rising above the vicious and petty attacks that smeared his campaign. I’m still aghast at the nastiness that people have to endure while running for local office, and I hope that Scott’s memory haunts anyone and everyone through our next local election who thinks accusations of evil are of any benefit in any way.

Without knowing it was his last civic adventure, it was an ideal. For Scott to walk door to door, knocking and talking – the perfect guy for the job. I was sorry he did not win his seat on the city council, I felt that he had completely earned it.

His years on the Planning Commission surely helped to change the shape of this city he loved so much. He was the only person who could translate Chamber of Commerce language into anything I could listen to; sadly, that grammar is gone, the alphabet is lost.

I’m so glad he got to be in his daughter Molly’s wedding, that he and Leslie had their trip to Paris and their Hawaii holiday. As a member of the cancer club, you don’t forget that every day matters, that the present is the gift.

In our final phone conversations, Scott had two ideas that he was trying to weave together; a dream of the island of Corfu and power of Prospero’s books from Shakespeare’s “Tempest.” While I jokingly confessed I had nothing from Prospero in my library, he simply laughed and disagreed. “You own those books, you know you do, I know you do, go and look again.” The dream world, the magic, the water coming back to the shore, he just kept on talking trying to find the thread that would let the weave hang together.

I knew it was morphine and madness, the respite from what must have been agonizing pain. The last time we spoke, he stopped in mid-sentence, something I had never heard him do. It gave me the space to imagine the conversation would pick up again somewhere.

My friend Juli Leeds, who died from cancer in March, was also one who went to the beach to find peace. She would take a few bags of snacks and supplies and hand them to the homeless, giving a little moment of connection, a smile, a handshake. Because we are all in this club, the human race. Healthy or sick, crazy or sane, no one has a permanent address. Strength can ebb away in the space of heartbeat. Years of darkness can dissipate as the light returns.

All we can choose to do is to continue to care.