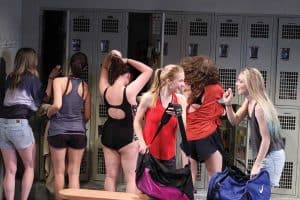 Center Theatre Group’s Block Party continues with the opening of The Echo Theater Company production of “Dry Land” this Sunday, May 14 at 6:30 p.m. at the Kirk Douglas Theatre. Written by Ruby Rae Spiegel and directed by Alana Dietze, “Dry Land” will begin previews May 12 and continue for 11 performances only through May 21, 2017.
Block Party highlights some of the remarkable work being done in other, more intimate theatres throughout Los Angeles by fully producing three previously staged productions. The three visiting companies received the full support of Center Theatre Group and its staff in order to fund, stage and market each production. This year’s Block Party started with the Coeurage Theatre Company production of “Failure: A Love Story” April 14 through 23 and continued with The Fountain Theatre production of “Citizen: An American Lyric” April 28 through May 7.
“Dry Land” is a haunting play about female friendship and an abortion that takes place in the locker room of a central Florida high school. Written when Spiegel was just 21 years old and still an undergraduate at Yale, the play is a deeply truthful portrait of the fears, hopes and bonds of teenage girls — as gut-wrenching as it is funny. In his New York Times “critic’s pick” review, Ben Brantley called “Dry Land” “tender, caustic, funny and harrowing, often all at the same time.”
The cast of “Dry Land” includes Daniel Hagen, Ben Horwitz, Connor Kelly-Eiding, Teagan Rose and Jenny Soo. The cast also includes Jacqueline Besson and Alexandra Freeman as well as USC School of Dramatic Arts students Francesca O’Hern, Bukola Ogunmola, Sidne Phillips and Tessa Hope Slovis. Scenic design is by Amanda Knehans, costume design is by Elena Flores, lighting design is by Justin Huen and sound design is by Jeff Gardner. Anna Engelsman is the production stage manager.
On Wednesday, May 17, audiences are invited to attend a moderated Stage Talk with the “Dry Land” cast and company following the performance. Patrons must purchase a ticket to that performance in order to participate.
“As we celebrate Center Theatre Group’s 50 years of creating theatre in Los Angeles, we want to turn the spotlight on some of the remarkable work being done on other stages,” said Center Theatre Group Artistic Director Michael Ritchie in discussing Block Party. “Coeurage Theatre, The Echo Theater and The Fountain Theatre, as well as others throughout L.A., regularly produce excellent, boundary-pushing work and we’re so glad they are sharing some of that work with us.”
Applications for the 2017-2018 Block Party are now being accepted. More information is available at www.CenterTheatreGroup.org/BlockParty.