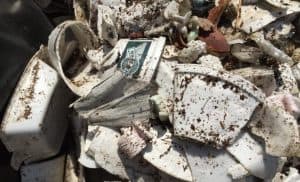 After multiple meetings, challenges and controversies, the Culver City Council passed the polystyrene ban with a solid five ayes, to go into effect in November of this year.

After a year and a half of presentation, reorganization and major support both within the community and without, the polystyrene ban passed with unanimous support from the council. While the original language of the law had received wide praise, an ‘exemption clause’ added at the first reading drew critique from all the organizations that had originally supported the rule. The second reading, which was the formal legal presentation to the law about to take effect, drew both support and suggestions from the crowd attending the meeting.

Sandrine Cassidy Schmitt of the Ballona Creek Renaissance, the organization that first presented the idea to council in 2016, came to the podium to say she was “very pleased. You know how much we care about this issue, and  we will continue to work with you on revitalizing the creek. ”

Craig Cadwallader of the Surfrider Foundation made a passing reference to the changes in language that had evolved with the ordinance at previous council meetings, saying  “While we hope to strengthen it, we are glad it’s as strong as it is.”

The West LA Chapter of the Sierra Club was more specific and direct, with David Haake asking “We would like to know how many businesses receive exemptions so that we as consumers can make decisions about supporting those businesses. You may also wish to consider ‘sunsetting’ that exemptions clause so we can look to the future of the creek and the city.”

Culver City resident Michelle Weiner spoke, representing Transition Culver City, “if we keep on going in this direction,” referring to the plastic bag ban and the polystyrene ban, “then there will be less need for drilling to get petroleum.  I celebrate the win- win for the people and the environment.”

Mayor Jeff Cooper, presiding over the first meeting his term, was supportive. “As an occasional surfer, I can fully appreciate and understand the need for this, and I’m happy to have Culver City take the lead. We want to use this [local polystyrene ban] to support nay action being taken at a state level, feel free to use my name or my title in any way that would be helpful. ”

The motion was made by Council member Jim Clarke and seconded by member Gōran Eriksson, and passed with five ayes.