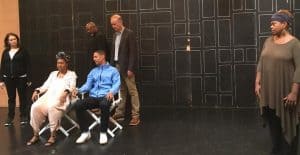 Center Theatre Group’s Block Party continues with the opening of The Fountain Theatre production of “Citizen: An American Lyric” this Sunday, April 30 at 6:30 p.m. at the Kirk Douglas Theatre. Based on a book of poetry by Claudia Rankine, adapted for the stage by Fountain Co-Artistic Director Stephen Sachs and directed by Shirley Jo Finney, “Citizen: An American Lyric” will begin previews April 28 and continue for 11 performances only through May 7, 2017.
Block Party highlights some of the remarkable work being done in other, more intimate theatres throughout Los Angeles by fully producing three previously staged productions. The three productions receive the full support of Center Theatre Group and its staff in order to fund, stage and market each production. Block Party began with the Coeurage Theatre production of “Failure: A Love Story” April 14 through 23 and will continue with The Echo Theater Company’s production of “Dry Land” running May 12 through 21.
“Citizen: An American Lyric” fuses poetry, prose, movement, music and the video image in a provocative stage adaptation of Claudia Rankine’s internationally acclaimed book of poetry about everyday acts of racism in America. Of Rankine’s “Citizen,” The New Yorker wrote that it was “brilliant… [and] explores the kinds of injustice that thrive when the illusion of justice is perfected.” The New York Times wrote that “Rankine brilliantly pushes poetry’s forms to disarm readers and circumvent our carefully constructed defense mechanisms against the hint of possibly being racist ourselves.”
The cast of “Citizen: An American Lyric” includes Bernard K. Addison, Leith Burke, Tony Maggio, Monnae Michaell, Simone Missick and Lisa Pescia. Scenic and projection design is by Yee Eun Nam, costume design is by Naila Aladdin-Sanders, lighting design is by Pablo Santiago and original music and sound design is by Peter Bayne. Anastasia Coon is the movement director and Shawna Voragen is the production stage manager.
Audiences are also invited to engage in discussion with the “Citizen” cast and company following each performance during moderated Stage Talks. There will be no Stage Talk held on opening night.