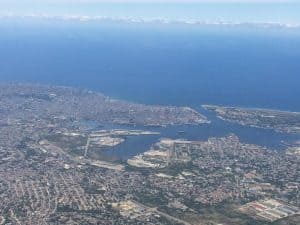 The final leg of my spring break trip this year was last, but in no way least: Cuba. I am so glad that I decided to do what I called the “Americana” portion first: New York to Florida via the I-95, and then departing for the decidedly non-Americana Cuba from Florida, Fort Lauderdale, to be exact.

Cuba moved up a few positions on my bucket list when restrictions to travel there from the U.S. were lifted, but then again with the U.S. tightening its borders. Visas and immigration issues are often reciprocal, as it goes with Brazil, for example. It costs Americans a few hundred dollars and a time-consuming, arduous, process for an American to go to Brazil, because apparently America requires the same of Brazilians. Back when I was in the travel industry, part of our jobs sometimes was to arrange for customers’ visas…what a hassle – with handling a person’s passport, dealing with a bunch of handwritten paperwork, monetary transactions, and courier services – oy vey. Then, as such sanctions were gradually lifted, guess what happened? – Tourism. And tourism begets so many aspects of wellness for a society: economic goes without saying, not to mention intercultural understanding.

Back to Cuba: the first pass of questions people have had for me, and biggest worry before I actually arrived was, how difficult the visa process might be. When booking the airline ticket, you had to choose one of twelve reasons you were visiting there, and I’d forgotten what I wrote. I was worried I’d fail some interrogation upon arrival. FYI, no problems whatsoever; you write “people to people” at the time of booking, and march up to the airline counter to get your boarding pass (no pre-check in because of this process), pay $50 for the visa to the airline and, viola, if you’re going from Florida, you’re in Havana within an hour of departure. The explanation I want is: WHY, when entering THIS country, it took four times the amount of time to get back into the United States for a tax-paying American citizen carrying a United States passport! For the life of me, I cannot fathom why this is and has been the case as far back as I can remember…from Fort Lauderdale to Hawaii, and everywhere in between. Why does the federal government not “drain the swamp” of no fewer than four – sometimes five or six – checkpoint bottlenecks for a non-fugitive American to come back home?

In contrast to situations we grapple with in the U.S. like these, in many ways, Cuba represented simplicity. Island life often feels simpler, 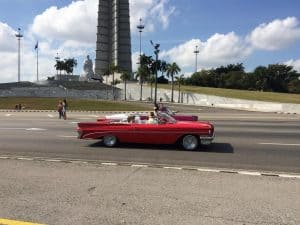 unless your island is as big as Japan or England, of course. As most know, the main mode of transportation there is cars, and amazing cars they are. We made the mistake of trying to walk here and there the second day; it happens to be a far richer experience to hail one of the colorful taxis they maintain: vintage cars. We rode in a 1936 Ford, a 1952 Chrysler, a Benz-like Chinese sedan, and one nondescript old jalopy…and nobody is looking to rip you off. In this and other communist countries, prices are pretty much set (for the moment). You can bank on knowing how much it will cost from A to B, no meters, no Ubers or Lyfts. And – as a matter of fact – you don’t see people with their heads down ordering the cars on their phones.

Speaking of the internet, it is not that there are prohibitions, like there might be in some oppressive countries – for heaven’s sake, we could get CNN in the hotel room. The infrastructure for it is just limited, at present. You can have as much of your fix as you want in the many, utterly pleasant, hotel lobbies around town. You just have to purchase an internet card for about $5. You scratch off a special code, and surf you go. I did it once, just to reach out to my kids, and look up some information about sites to see while in Cuba…I FORGOT that, to a certain extent, you do need to go back in time a little; you cannot just Yelp up a restaurant, or Trip Advisor a “Thing to Do,” or Google Map a walk for yourself on the fly. An old-fashioned, paper, guidebook would be the way to go. I bought one from a British author that was published in 1993, and it sufficed for general information; I plan to buy one here still with nice photos, so I can check off what I did and circle what I want to do next time because, and here’s the verdict, I am confident that there WILL be a next time – the place was that inviting, entertaining, and downright delightful.

In sum, delicious food was to be enjoyed, at reasonable prices, albeit not extremely varied, but, if you like fresh fish, seafood, meat, vegetables, fruit, beans and rice, uh, carefully prepared sustenance in beautiful surroundings. The stories I heard of bad food were not true, in my gourmand estimation. The architecture, some admittedly dilapidated, some under renovation, is definitely a draw. The buildings are colorful, ornate, and come from eras that span from Cold War 60’s to Conquistador 1500’s. The various eras of history are truly interesting, and resonate with the upbringing of a person my age. Somewhat like New Orleans, there is color and light and art and music everywhere – emanating from residences, played in hotels and restaurants by small groups of musicians, and in bars and “discos” at night, where people dance Cuban style salsa – another main draw of the trip for me. I have been doing so-called “Rueda in the Park” here in Culver City for the past four years or so, and I wanted to do it in the mecca. Rueda dancing, however, is organic – you never know when it will start up in the middle of a floor of people dancing regular Cuban salsa. Finally, on Friday night before leaving, we were able to join a Rueda at the Florida Hotel bar…priceless. 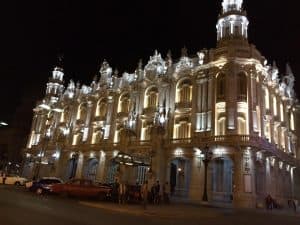 There is more to say about Cuba to be sure, but just one NOTE, if you are planning to travel there soon. You need them (bank) NOTES. Americans cannot use any debit or credit cards AT ALL. So, like in the old days before even American Express Travelers Cheques, you must budget for, and bring enough cash. This likely will be changing soon. Wistfully, and as much of a hassle as it was to change my monetary habits for a few days (feeling like I had to forcibly detach the plastic from between my thumb and index finger), I am not so excited about seeing Havana change with the inevitable onslaught of Americana. And maybe it won’t. They do seem particularly mindful about not reverting to their pre-revolution Vegas-like days. Hasta luego, Cuba!