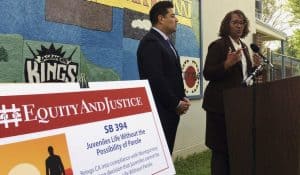 Nine days after introducing a comprehensive bill package to reform California’s criminal justice system for juveniles and young adults, five of the measures have passed their initial policy tests.

The latest action came today as the Senate Public Safety Committee approved bills to eliminate court fees on those found innocent and to keep records sealed on those not convicted of a crime.

“Arrests that don’t lead to conviction can show up in background checks and block people from finding a job or an apartment,” Lara said about SB 393, which is sponsored by the San Francisco District Attorney’s office. “Studies show that 40 percent of men and 20 percent of women were arrested before age 23, yet nearly half were never convicted.”

To continue allowing public access to arrest records only casts a pall of suspicion over people not convicted of a crime and serves no public safety purpose and holds people back from jobs, which is the number one crime-fighting tool we have, Lara and Mitchell agreed.

The second measure, SB 355, would remove the requirement that criminal defendants reimburse the courts for appointed counsel costs unless the defendant is actually convicted of the charged crime.

“Under current criminal law, a low-income, homeless or impoverished person who is accused of a crime that they did not commit can still be ordered to pay the court for the costs of a court-appointed attorney,” Mitchell said. “The impact of this law subjects an individual who was falsely arrested, wrongly imprisoned, wrongly prosecuted and ultimately exonerated to pay an ‘accusation tax’ penalty of thousands of dollars for asserting their constitutional right to an attorney.”

The three other measures the Public Safety Committee approved last week are:
SB 190 – Juvenile Fees
Ends the harmful, unlawful and costly assessment and collection of administrative fees against families with youth in the juvenile justice system. Status: To be reviewed by the Senate Committee on Health and Human Services April 4.
SB 394 – Juveniles Life Without the Possibility of Parole
Brings California into compliance with Montgomery v. Louisiana decision that juveniles cannot be sentenced to Life Without Parole. Status: To be reviewed by the Senate Appropriations Committee on a date yet to be set.
SB 395 – Miranda Rights for Youth
Requires youth under the age of 18 consult with legal counsel before they waive their constitutional rights in interrogations with police. Status: Awaiting assignment by the Senate Rules Committee.
The three measures awaiting their first policy hearings are:

SB 439 – Minimum Age Incarceration
This would exclude children age 11 and younger from juvenile court jurisdiction and would promote the rights, health and well-being of the child by curbing premature exposure to incarceration. Status: Awaiting assignment to a policy-review committee. Status: First hearing on April 4.

SB 695 – Sex Offender Registry Reform
Creates a tiered system for sex offenders and will assist law enforcement to better assess risk and be more efficient in use of limited resources. SB 695 is supported by the Los Angeles County District Attorney’s office.  First hearing is scheduled for April 18.