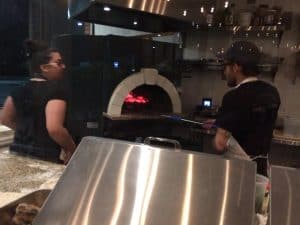 Consistently rated as one of LA’s top bakeries, Culver City’s own Lodge Bread re-opened this past Saturday after a relatively short hiatus to renovate and expand. They opened in 2015, and my weight gain in 2016 is partially their fault. I’d often spend half a weekend day there with a cup of coffee, eating one of their special toast concoctions, or their shakshuka. I’d be acting writer-like by writing my Ruth’s Truths, or reading. I became a regular, as have many other Culver Citi-zens, or so it seemed when I visited this past Tuesday, with a steady chain of customers on a Tuesday night between 8:00 and 10:00pm.

Lodge Bread took over the storefront next door to it, making half of it their bakery, sitting areas in the middle, and in the other half, a wood-only fire breathing oven was installed. They keep it at 850 degrees, churning out at least five different types of pizzas speedily. Sunday used to be the only day you could get the pizza; they made a single exotic flavor per night, serving them after closing from 5pm until 8pm, or until they ran out, whichever came first. We’d plan a family Sunday night around Game of Thrones and pizza, or whatever show we could watch with the pizza. They literally broke their oven making the pizzas; too much heat for that type of oven, apparently. The new store therefore has been outfitted with a brand new oven for baking their famous breads, and their massive cookies, pastries and other delectables are back, too.

We all love Lodge Bread so much not only for the hand-made bread, but for its entrepreneurial, caring nature. It started right here in Culver City, and quickly gained notoriety all over Los Angeles. The owners are not just food-artisans, but customer service aficionados, not because B-school dictates it, but because their work is from the heart. Lodge Bread is also an attraction. The whole place is made of windows, so you can actually see the sensual kneading of the bread in front of you. I love watching them make the so-called toasts; Maldon sea salt sprinkled from high up in the air, with lovingly placed, colorful, thinly sliced radishes, or the innards of a whole avocado mushed up and laid on a thick, toasted, whole grain bread.

You just start talking to people, because you’re there for the same reasons, and last Tuesday was no exception. The atmosphere of the place is so darn loving. Owner-baker-chef Alex Phaneuf kept telling us, “I missed you!” in reference to the period when they were closed for renovations. The couple sitting next to us complained when Alex drank a sip of the wine we offered him instead of the beers they’d brought to share (liquor license pending, we’d all BYOB’d). We got to talking, and when I told the couple that I not only live here in Culver City, but work for the school district, they said to me half-jokingly, “Oh, it’s YOUR fault!”

Fault? Apparently, it was my fault that their rent was so high, AND, that their landlord had passed on the now onerous CCUSD parcel tax to them. I happily said, “Mea Culpa.” Not about the parcel tax, which I knew would not stop at the initial $90 or so dollars promised for “just a few years” and has now increased to hundreds of dollars, and for who knows how long. Shucks, who am I to complain about money for the schools; at least it is going to where I work, and not defense spending. What I was willing to take the “blame” (read: credit) for, are my contributions to the positive changes at CCUSD over the last fourteen years.

Through this time period, I have been involved directly in creating enrichment and intervention programs at the middle school, portions of which remain to this day, similar initiatives at the high school level, not to mention organizing an amazing summer program this city and its environs is fortunate to have, myriad arts integration initiatives, and the implementation and maintenance of various technical advances. Not to mention, I taught English and Japanese, too. I shepherded two of my own sons through the K-12 Japanese Immersion program, and witnessed the transformation of a high school that seemed merely determined for everyone to graduate with a diploma, to a high school that has placed students into the best universities in the nation consistently over the past several years. My sons now both live in San Francisco, one of the most diverse and inclusive cities in our country in its own right, but claim to miss the diversity they grew up with here. They are correct; Culver City Unified School District just earned the honor of being identified among the most diverse in the state.

I was lucky to have bought my house here in 2003, a purchase fueled 100% by my desire to put my kids through the Japanese immersion program here, which, at the time, was actually recruiting outside the district for takers. I’d sold my house in Mar Vista at a 70% increase in value from its purchase price, which bought my boys two separate houses to live in, here in Culver City, despite the upheaval in their lives of divorce, and my transition into teaching from the corporate world.

We’re all to blame. Realtors tout our great schools, social media touts our Lodge Bread, our new Trader Joe’s and OSH are votes of confidence. There’s always been is our proximity to the beach and the airport, plus good weather. Certainly related to a generally improved economy in the last eight years, the Culver City boom is to blame for blessedly high property values, and high rents to go with it. Unfortunately, there’s one more thing that really can be blamed on the prosperity we’ve been enjoying: more theft. But that’s another story.