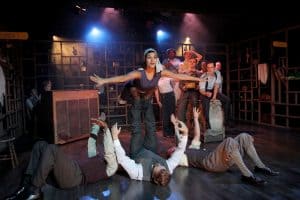 First to come will be “Failure: A Love Story” chronicles the lives, loves and deaths of the three Fail sisters and the one man who fell in love with each of them. Set against the backdrop of 1920s Chicago, this touching, whimsical tale explores the impermanence of life and the permanence of love. By the end of 1928, all three Fail sisters will be dead — expiring in reverse order, youngest to oldest, from blunt object to the head, disappearance, and finally consumption. Tuneful songs, and a whimsical chorus follow the story of Nelly, Jenny June, and Gerty as they live out their lives above the family clock repair shop near the Chicago River, before their time unexpectedly runs out. A magical, musical fable where, in the end, the power of love is far greater than any individual’s successes or failures.

For tickets, go to CenterTheatreGroup.org