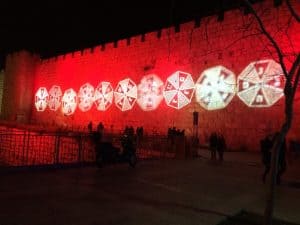 “Nenmatsu-Nenshi” (年末年始) is an important term in the world of Japanese tourism, an industry of which I was a part for twenty years. The term means “year end, year beginning” and it refers to how the holiday season fits onto a calendar, in an attempt to find enough consecutive days for a trip somewhere. This past Nenmatsu-Nenshi was extra special; not only did it turn out to be long enough to encompass both Christmas and New Year’s Day within it, but it included the entirety of Hanukkah as well. In fact, in a relatively rare occurrence caused by the intersection of the lunar Hebrew calendar and the solar Gregorian calendar, the first night of Hanukkah started on Christmas Eve.

I considered this a good excuse to be in Israel for the occasion. Top priority was to stay in Jerusalem on the night of Hanukkah-Christmas, or Hanumas, like Thanksgivukkah from a few years back. I managed to book a room at the Gloria Hotel, a property – one of my favorite hotels in the whole world – located right inside the walls of what is referred to as the Old City of Jerusalem. It is in the so-called Christian quarter, run by Christian Arabs, and frequented by Christian guests. One hears different languages, from German to Tagalog to Polish in the elevators. From the dining room, where the generous breakfast buffet is located, you are able to look out at the rooftops of new Jerusalem and the ramparts of old Jerusalem. My travel companion was a native-born Israeli – the term they use is “sabra” (cactus) – who wouldn’t normally be wowed by anything they’d see in Israel. This Israeli was in fact moved by the beauty and perfection of the location. the last time he’d driven through Jerusalem’s Jaffa Gate, it was 1975, and he was driving a Jeep instead of a Hyundai. 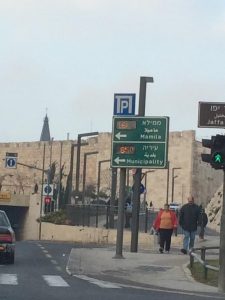 We arrived around 3:00pm on December 24th, Christmas Eve. Not much was going on because, on top of the double-whammy of holiday observance, it was a Saturday, and the sabbath in Jerusalem is serious business; its like being in London on Christmas Day. Although Tel Aviv, Haifa and Eilat can still be somewhat lively on the sabbath, Jerusalem is known for rolling up the sidewalks from sundown Friday evening to sundown Saturday night. Thinking there’d be some kind of mass in one of Christendom’s holiest sites: The Church of the Holy Sepulcher, we walked there first, only to find it quieter and less populated than usual; it turned out that it ain’t Christmas ’till its Christmas. We grabbed dinner at a Palestinian Halal restaurant near the church. As darkness fell on the way back to the hotel, and as the Muslim-owned souvenir stores closed shop for the day, the Jewish quarter of the City came alive with restaurants opening after the sabbath and oil-burning menorahs in every window. Indeed, there would have been no better place to be on such a night. There were various light shows to be seen; the best was a colorful projection onto the walls of the Old City.

The next day, a Sunday, was Christmas, and tour groups from all over the world were visiting the sites. Two Asian ladies asked me for directions to “the church” in English; I wondered if it was my tourista looks, or, often told how well my face “fits in” in Israel, maybe my acquired Asian background was peeking out. I chuckled and first told them there was a church every few feet, but I knew they were looking for the Holy Sepulcher (originally built in AD326AD) and I prided myself on actually being able to tell them how to get there. 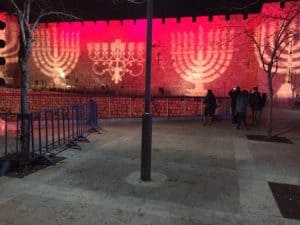 Another significant highlight of the trip was my first visit to a kibbutz. It is called “Kissufim,” which means “yearning” and is located on the border of the Gaza Strip. When we arrived, we sped right past the entrance gate, in an attempt to get a look at the surrounding area while we still had daylight. We drove about three minutes, until we were confronted by a section of a wall, which looked something like the pieces of the Berlin Wall that you see here and there on display. The minute we stopped the car, two military trucks came out of nowhere, from behind the wall. They stopped, approached our car, and asked us what we were doing. My companion had grown up on the kibbutz, and had been accustomed to roaming freely in the area. He told them that it seemed quiet (I understood the word “sheket” which even a modicum of American Jewish education teaches you is “to be quiet”), to which the soldiers apparently responded something like “calm before the storm.”

We turned back toward Kissufim and walked down the memory lanes of the kibbutz; I’d seen photos of it being built circa 1950 at my friend’s dad’s apartment in Tel Aviv. His dad had recently moved into a retirement home, so we were there to collect some last items. The most poignant here moment was our tour of the cemetery. After visiting my friend’s mother’s grave, there were more people he could identify in the cemetery than still lived in the kibbutz for sure. Some classmates had been killed on land mines right in the area, some had died in Israel’s wars. As it got darker, we began to hear what sounded like the “sonic booms” of my childhood. I checked my “Red Alert” app which reports rocket attacks which may or may not be intercepted by the Iron Dome. We saw no reports, so wished to think that the sounds were just military exercises.