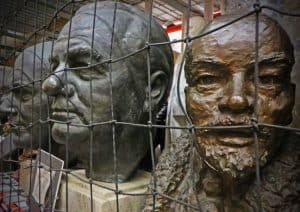 UCLA Professor John McCumber held a standing-room-only crowd at Culver City’s Wende Museum of the Cold War enthralled last week by highlighting how philosophies in mid-20th century East Germany influenced American thinking then – and continue in current times.
“Professor McCumber presents an aspect of the Cold War that has become more important even since the founding of the museum 12 years ago,” said museum founder Justinian Jampol.
Officially the German Democratic Republic, East Germany was a short-lived Communist nation smaller than Ohio with half the population of California. Created at the end of World War II when territories were divided among the victors, it was in the Eastern Bloc, part of the Red Scare of the McCarthy Era in American politics and a pivotal point in the Cold War between the Democratic United States and Communist Soviet Union.
McCumber said East Germany held regular elections in which citizens voted freely for candidates chosen for them by the Soviet Socialist Party. German philosophy was that the government knew what was right for its citizens, so decided which candidates were qualified to vote for.
He drew a parallel with the American elections of this century, in which one party, the Republicans, lost the popular vote in the majority of the elections, but won the presidency by being elected by the unelected Electoral College.
“Let’s face it, you don’t get to choose what’s right and what’s wrong,” he said.
In Cold War philosophy, all decisions are the same: how to tie your shoes or start a war, he said. “The idea is to increase wealth and power, so fund business and law schools, which allow people to stay rich and powerful, and defund other faculties.”
McCumber has authored 12 books on the influence of German philosophy on American culture and the legitimation of oppression. His latest was published in September 2016. “The Philosophy Scare: The Politics of Reason in the Early Cold War” details McCarthy era political pressures that changed university philosophy departments in the mid-1900 United States, beginning at UCLA where names of job applicants were submitted for governmental vetting of their opinions expressed in papers, briefs and books. Called the California Plan, powerful political pressures spread the practice to every university in America except Reed College in Oregon. The Allen Plan’s fearmongering disenfranchised an estimated one job applicant a day, changing faculties by eliminating those of divergent thoughts and demonstrating how politics can radically change human intellectual history.
“(McCumber) is right to worry that this stage is not ended,” said Robert Scharff of the University of New Hampshire.

Midcentury protests were about serious evils like war and civil rights. Current U.S. protests like the Women’s March are like those in East Germany in 1989, McCumber said. Causes are writ large on often-funny signs like “We Shall Overcomb” and “Ikea has better cabinets.”
They are meant to be shared with others, he said, like when the Berlin wall was opened and people walked through to a big party to be with other people.
“We need to walk through our own walls and enjoy being with other people again,” he said.