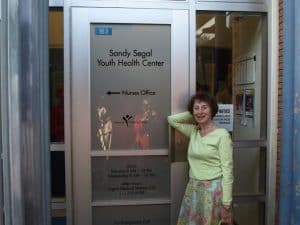 It’s hard to overstate the importance of the Sandy Segal Youth Health Center on the Culver City High School campus. Unique in the state; Culver City is the only school district in California that provides physical and mental health services to students on campus. The real number of lives saved cannot be known, but the Center can verify that they provide over 4,000 hours of mental health services and over 8,000 hours of physical health services to students every year. Somewhere in those hours, children are helped without being judged and lives are saved.

The Del Rey Yacht Club was the picture of health on Saturday, February 25, 2017 as the board and volunteers of the Sandy Segal Youth Health Center, the board and the members of the Exchange Club, and a large cross section of people concerned with the well being of CCUSD students gathered to add even more to their contributions of time and money to the cause.

Dr. Sarah Carpenter, long time staff and board member at SSYHC, noted that some of the physical health services were as simple as getting a student cleared to participate in a sport,  an activity so basic to high school that she felt no one should have to miss it because of a lack of health insurance. “Getting these kids the physical that they need to participate in baseball or football can also give them a baseline for serious health issues they may not even notice they are at risk for. It’s really a win-win.”

After a casual cocktail hour and silent auction with a subtle but sweet soundtrack played by Ronnie Jayne,  Pat Levinson took the podium with a smile and said “Good evening; I’m Mike Cohen, and I am, as always, the Master of Ceremonies.” It was a wink to the fact that Mr. Culver City was focused on the Screenland 5K scheduled for the next morning, and an acknowledgment towards Mike Cohen, who has given much of his time and talent over the years to support the center.

Scott Houston of the West Basin Water District, awarded the first check of the evening, a donation of $1,800 to support the Center and also lauded their help with a West Basin sponsored rain barrel distribution held in 2016.

Testimonials to the importance of the services provided were offered, with stories of both counseling and physical care that had been provided to students in moments of real crisis.

The Exchange Club topped the evening with a donation of $10,000, and incoming President Mike Snell was happy to present the donation.

With support from the Venice Family Clinic, the L.A. Child Development Center and the Friends of the SSYHC, Culver City’s students will enjoy another year of open access to physical and mental health care, without judgement.